The only sad thing about this show never airing is that Kim Kardashian is wearing a Slave Leia costume.

In 2007, after the Comedy Central show, Crank Yankers ended, Jimmy Kimmel and the rest of the creative team were looking for something new. The result was a grown up urban ‘Muppet style’ show called Alligator Boots.

A pilot, featuring Kanye West, was shot but Comedy Central decided not to pick it up as a series. What has been released is a nine minute long behind the scenes video that shows what might have been.

Is it funny? I guess that’s subjective. Let’s put it this way, the highlight of the reel is Kim Kardashian dressed in a Slave Leia outfit saying this to Kanye West:
“You know that bear, the one that wants to put his penis in my vagina? I’m going to let him.”

On a side note… Kim Kardashian in a Slave Leia outfit. 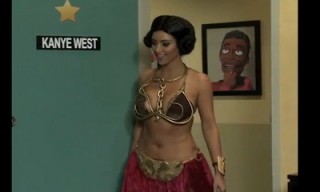