Goth forced to wear plastic bags on her feet by airport security because they deemed her goth spiky boots to be a terror risk. 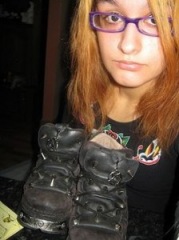 A British teenager was forced to wear plastic bags on her feet by airport security because they deemed her goth spiky boots to be a terror risk.

The 19-year-old, identified only as Sara M. for legal reasons, was trying to board a plane to Austria to visit her boyfriend when she was detained at Gatwick airport because of her boots. The Goth shoes had steel plates riveted to the outside and could be used as a weapon on flight staff reports airport security.

Sara was questioned by authorities for an hour before allowing to board another flight to Vienna. But only after she removed her boots and hand them in as luggage.

She was then provided with plastic bags to cover her feet as she crossed the frozen runway to board the plane.

In a statement where a goth finally has something to cry about. She says, “I was crying because I was so angry … I will never forget what happened.”