British scientists have developed a new engine that could propel a ship to the moon in as little as four hours. That’s pretty amazing when the current average speed is around three days! The new electromagnetic propulsion drive uses solar power to produce microwaves that bounce back and forth inside an enclosed chamber. That means indefinite, fast spaceflight without a need to refuel… EVER!

The idea first came to British inventor Roger Shawyer nearly 15 years ago but was ridiculed at the time as being scientifically impossible. Interestingly, some scientists still think it’s impossible as the drive defies the basic laws of conservation and momentum which states that if something is propelled forward, something must be pushed in the opposite direction. So the forces inside the chamber should cancel each other out. 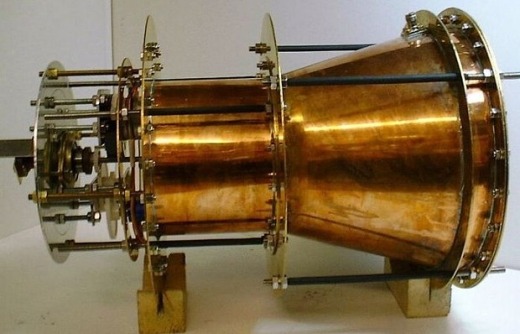 Still, tests by both Nasa and the Space Systems at Dresden University of Technology in Germany have both shown that it actually produces thrust. In fact, they now theorize that it could produce several thousands times more thrust than a photon rocket, the technology that can currently get a rocket to the moon in 70 days.

In big terms, this cuts down the trip from here to A trip to Alpha Centauri from tens of thousands of years to just about one century.