The video cost $50,000 dollars to make and was created to showcase the battle of “Good vs IBM.”

Is it just me or are we seeing more of Steve Jobs since he passed away than we did for the whole year before that? Apple made TV history with their 1984 Super Bowl Commercial, featuring a woman throwing a hammer through a giant “Big Brother” style screen. Now it has come to light that this was not the end of the theme. Jobs spun the idea off into an internal sales video that has just been released. Jobs is more than just the man behind the idea here, he stepped in to play the role of FDR!

The video cost $50,000 dollars to make and was created to showcase the battle of “Good vs IBM.”

Here’s a description of the meaning behind the video from Network World’s Paul McNamara:

Anyone who’s seen the TV commercial no doubt recognized in this film the reprised role of the female hammer thrower, although I‘m not sure if it’s actually Anya Major from “1984.” And, if you recall, Apple’s famous ad ended with a narrator intoning: “On January 24th, Apple Computer will release Macintosh. And you‘ll see why 1984 won’t be like ‘1984.’ ” As you just saw, this film begins: “On January 24, 1984, Apple Computer introduced Macintosh. And we saw why 1984 was like … 1944.”

Here is the complete sales video:

Just in case you haven’t seen what is considered to be one of the most effective TV commercials of all times. Here’s the video of the famous Apple 1984 commercial. 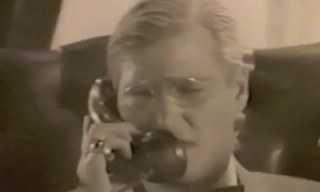