This might be the coolest Gingerbread House that we’ve ever seen. It even has a pile of white chocolate Storm Trooper Heads!

We’ve seen some pretty awesome ginger bread creations during holiday’s past, but we’ve never seen anyone create such an epic tribute to Star Wars in edible form. The folks over at The Infinite Yum Yum Blog spent over a month creating not only the Ewok Village, but also a Death Star, Several Star Wars Characters and even accessories like beheaded storm troopers and speeder bikes. We aren’t sure how they’ll top it next year. We suggest taking a crack at Pandora from ‘Avatar’. 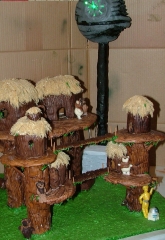 If you want to see more photos and a great detailed explanation of how the Ewok Gingerbread Village was created, CLICK HERE.