I would describe this tree as just like a twig. To be honest, it looks like something that people would throw in a skip after Christmas. 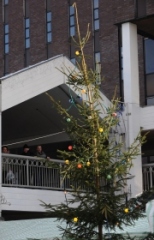 24dash.com has a great story about the little Christmas tree that couldn’t. You see, a shopping center County Durham in the UK unveiled their Christmas tree for the year with a less than stellar response from the public.

The tree was unveiled just hours before pop star Natasha Hamilton, a singer with girl band Atomic Kitten and now a solo artist, switched on the Christmas lights.

The singer more than made up for the craptacular holiday display, wowing fans with her hits.

Today it stands in the town centre’s Yoden Way festooned in a dozen Christmas lights and slumping slightly under the onslaught of a wet, cold and windy December day.

One shopper said: “It’s the worst Christmas tree in the country. I feel like going to Wilkinson’s and buying some tinsel and decorating the tree myself.”

“I would describe this tree as just like a twig. To be honest, it looks like something that people would throw in a skip after Christmas.

“If the shopping centre couldn’t have afforded to put up a better Christmas tree they shouldn’t have bothered.

“It is an insult to Peterlee. I think they should take it away and throw it in a skip.”

It sounds to me like the people of Peterlee have not seen the Charlie Brown Christmas Special. It’s not the tree that makes Christmas, it’s the love.

On a slight side note, I was in Walgreens (local pharmacy) the other day and they were selling the Charlie Brown Tree for twelve dollars. It still looks better than the one this mall was stuck with.