A German artist is protesting what he calls a lingering fascist tendency of the German society by posing 1,250 Nazi garden gnomes. 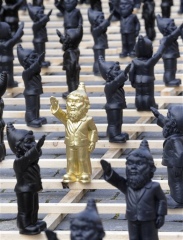 A German artist is protesting what he calls a lingering fascist tendency of the German society by posing 1,250 garden gnomes with their arms outstretched in the classic Hitler salute.

Artist Ottmar Hoerl posed the creepy gnomes in the historic central marketplace of Straubing, a town in southeastern Germany, on Wednesday to make his political statement about the condition of his country. The exhibit called “Dance with the Devil” will open on Thursday, Oct. 15, 2009 and is set to run through October 19, 2009.

A majority of the garden gnomes are black plastic, but 20 are painted gold.

Although displaying Nazi symbols is illegal in Germany, a court ruled earlier this year that Hoerl’s gnomes were clearly satire and thus allowed.

Hoerl says: “The fascist idea, the striving to manipulate people or dictate to people … is latently dangerous and remains present in our society.”