An Englewood, Florida woman was shocked when her new driver’s license she received listed her address as “Eat Ass.” 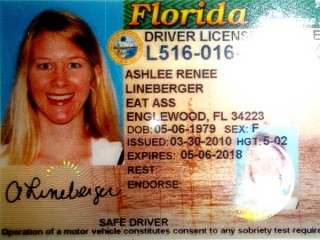 An Englewood, Florida woman was shocked when her new driver’s license she received listed her address as “Eat Ass.” Initially, Ashlee Lineberger assumed it was a joke, but upon further investigation, she found that it was indeed a legitimate license – with a bizarre mistake.

“I just remember her showing it to me and I was like, you’ve got to be kidding me,” said Lineberger’s husband, Charles. “It’s just funny.” Lineberger called the state Department of Highway Safety and Motor Vehicles, but hung up after being on hold for 35 minutes. She then went to her local DMV office.

“Even when I gave it to the lady at the DMV, she was shocked,” Lineberger said. “She said ‘I have to go show this to my manager, I cannot believe this.'” DMV officials initially told her she’d have to pay an additional $6.50 to fix the error.

Lineberger didn’t want to pay for the state’s mistake, but knew she had to get it replaced.

“Especially a mother of three, if I were to get pulled over by a cop and show him my licence, that’s all I have to give him,” she said. State officials later said they were investigating how the error occurred, and overnighted Lineberger a correct license at no charge.