Japan has pretty much made a sport out of creating new flavors of Kit Kats, but it looks like this time, they may have gone too far.

Japan has pretty much made a sport out of creating new flavors of Kit Kats. You can even get the chocolate covered wafers in the flavor of Sake` or melon and cheese. However, it looks like this time, they may have gone too far.

It has just been announced that they’ll be releasing a cough-drop flavored Kit Kat that will actually have real throat lozenge powder in the mix. It’s being released under the name “Kit Kat Nodo Ame Aji” (Kit Kat Cough Drop Flavour). Nestlé, says : “the ground cough drop powder has been kneaded into the white chocolate layers of the Kit Kat to provide a “fresh and invigorating flavour”.

Along with the unique flavor, the package will also be special. It will feature the face of Japanese Soccer Icon, Yasutaro Matsuki. After a career as a player and manager, he went on to become a well known announcer who has gained a reputation for yelling during broadcasts.

If, for some reason, these actually interest you, you’d better act fast. They will only be available in Japanese convenience stores from August 21 – September 5th. 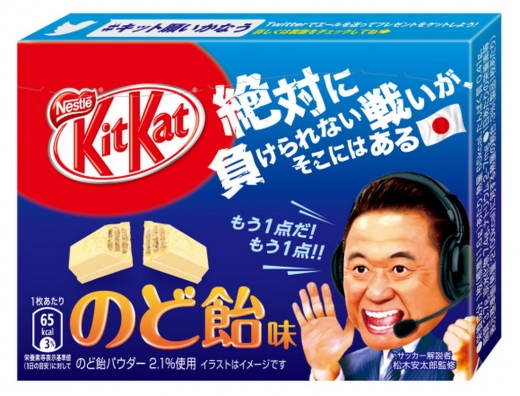