Grab Your Hatchets and Your Faygo – Insane Clown Posse Has a New Game!

Psychopathic Games recently announced that they’ll be releasing “Into The Echoside”, an ICP themed deck builder that features Juggalos journeying into “The Echoside.”

Gaming is going through a golden age right now. I’m not talking about console and PC, I’m talking about board games, deck builders, miniatures, and tabletop gaming in general. There’s clubs popping up all over the country for like-minded gamers and new games coming out to meet just about any interest.

Now, Juggalos can rejoice because they are no longer being left out in the cold. Psychopathic Games recently announced that they’ll be releasing “Into The Echoside”, an ICP themed deck builder that features Juggalos journeying into “The Echoside.”

the game will accommodate 2-4 players and will allow adventurous gamers a chance to tap into the power of famous Juggalo, artists such as the Kottonmouth Kings, ninjas, evil clowns etc. 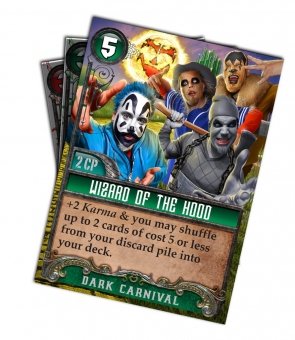 Expect to shell out around $40 for the game on either it’s July 20th release date or the opening of pre-orders on May 20th.

If you aren’t familiar with the song that inspired the new game, here you go:

Hat tip to Peter R. for the news tip!