It turns out a weekend of bad publicity was enough for Ina Garten to change her tune and find the time to grant Enzo’s wish.

Following up with the story we ran last Friday about Food Network’s Barefoot Contessa Ina Garten snubbing the wish of a terminally ill six-year-old who wanted to meet her, it turns out a weekend of bad publicity was enough for Garten to change her tune and find the time to grant his wish.

According to TMZ, Garten, who previously turned down Enzo’s dying wish to meet her twice, has released a statement through her rep saying she “only became aware of Enzo’s story this weekend (Despite the wish being over a year old)”

“[Ina] looks forward to inviting him to spend some time with her at the Food Network studios,” the rep went on to say.

And to that I only have this to say — Internet peer pressure FTW! 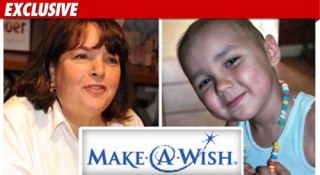