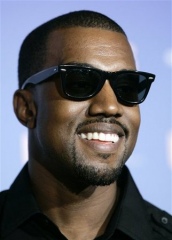 Kanye West is the man. Don’t believe it? Just ask him. According to a new article out from the AP, Kanye’s ego has gotten so far out of check that he now feels that he is to music what Michael Jordan is to basketball.

“I realize that my place and position in history is that I will go down as the voice of this generation, of this decade, I will be the loudest voice. It’s me settling into that position of just really accepting that it’s one thing to say you want to do it and it’s another thing to really end up being like Michael Jordan.”

In the spirit of fun, let’s take a look at this wisdom that spews from the voice of this generation.

… And I still can’t get this frickin song out of my head.