Who the f*ck is Justin Bieber?! And someone please tell me what manner of bird built a nest on his head.

Teeny bopper sensations have been around since the birth of the term “teeny boppers.” I think some notable ones are James Dean, Frank Sinatra and Elvis. Notice what all these guys have in common.

The last point isn’t the bane of their existence as it is for the rest of us mere mortals because it only adds fuel to the fire of their appeal.

And then we hit my generation.

Okay, so some of these people have talent and charisma. Hellloooooo, Johnny Depp! Most of the singing groups could really sing and not just look like they should be able to. GNR was awesome and so were all the RNB groups. I dunno about the rest of them.

So here’s what I don’t understand with the newest crop of teeny bopper sensations. What’s the big deal? NSync, I could sort of understand if I was pretty drunk. Backstreet Boys….uh…..sure……I guess….

Miley Cyrus? Yeah, she was wholesome pre-Pole Dancing days, Vanity Fair nekkidness and bump-n-grind dancing on some SYTYCD judge as shown on the news that I’m watching as I write this. 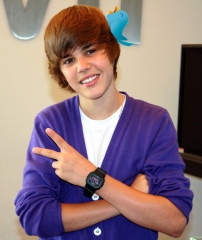 But who the f*ck is Justin Bieber?! And someone please tell me what manner of bird built a nest on his head.

I had no idea who this kid is until I heard the ear worm known as his hit “Baby.” I couldn’t get it out of my head but it wasn’t because it was such a good song. It’s because it is that annoying. I didn’t think much of him until I realized the pre-pubescent voice with the first solo on the new “We Are The World” belonged to him.

Okay. Now I had to know. Who the hell is this little snot and what exactly did he do to deserve a friggin’ SOLO on “We Are The World”? After a little snooping, I discovered he’s Canadian, he’s a pop star and he has the most retarded hair I’ve ever seen.

As for being a pop star….it seems like anyone and their mothers could be a pop tart…I mean, a pop star now. I’m sure if you rewound the clock by a decade, gave me a crazy personal trainer, a voice coach and a producer who could synth my voice however he wants, I could also be a pop star.

As for the hair….Wait. I take that back. I’ve seen the same haircut before and that was on my high school boyfriend’s head. In case you’re wondering if he won me over with his epic coif, allow me to say that’s a negatory. I hated it so much, he ended up cutting it off and styling it differently. I guess it all worked out because, as far as I know, he’s never had his hair styled like that from then on until now. Score one for me and my incredible sense of hair no-nos.

I’m not hating on the kid because he’s super successful. I just hope he doesn’t lose his way like most childhood stars do.

I’m hating on him because I think he has no talent, he’s not cute, I can’t stand listening to his voice cracking whenever he squawks….I mean….sings…., I think his songs suck and I can’t stand his hair.

Maybe I’ll change my mind when he finally makes it through puberty (Who knows? Perhaps his voice will become something I can tolerate listening to), he’ll become super hot as a man and he’ll finally fire the person who cuts his hair.

Until then, I will happily continue to change the channel whenever I hear his songs and wonder why sitings of him with Miley Cyrus is worthy of being on the news.

Bonnie N. Clyde is a writer for YouBentMyWookie.com and the alias of the Supreme Commander / Ultimate Destroyer. She writes in her blog over at MissBonnified.com and would have really worried our producer if she had said she thought Bieber was hot.