BBMLounge 2: Lodi Dodi, We Like To Party But Only If I Can Get There

I almost literally ran into His Royal Hotness, David Beckham. It was almost like a scene from one of those romantic movies. The prince descending the mansion steps the same time I, the loveliest princess beyond compare and all human reckoning ascend them… 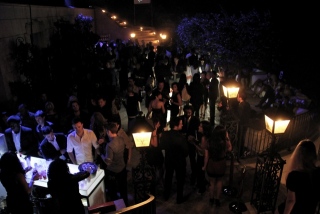 Imagine if you were told you got to a party that sounds like the following :

A super exclusive, red carpet party in a top secret location hosted by my beloved CrackBerry…..I mean….Blackberry and Xomad. Limos will be whisking the lucky party invitees to a mansion tucked far above Los Angeles where real stars shine upon the human variety in attendance. Catering is provided by Mr. Chows and the bar is hosted. Some time during the night, Ne-Yo will serenade us with a private concert.

Tell me this doesn’t sound like a bomb ass party because I’m telling you right now it does. The party itself was pretty awesome (cannot be emphasized enough!). The mansion was INSANE and they had this humangous screen with what looked like a live chat going on but with BBMs. You can BBM the limo drivers to come pick you up. There were charged BlackBerry batteries on hand so that you don’t have to worry about your phone dying on you as you BBM your friends, send your latest tweet or post your blog entry. Certain drinks had a Blackberry theme to it (Blackberry Lemonade, anyone?) and Ne-Yo tore it up. He sang “Closer.” I don’t care what all the other females say (including the ones he pulled on stage to dance with him) because he was singing only to me.

The following celebrities were in attendance : 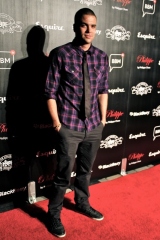 Out of this list, I saw James Kyson Lee and David Beckham. I’m sure I would’ve ran into more had the night not been a complete and utter fail but I’ll get into that in a bit.

I almost literally ran into His Royal Hotness, David Beckham, when he was coming down the stairs and I was going up. It was almost like a scene from one of those romantic movies. The prince descending the mansion steps the same time I, the loveliest princess beyond compare and all human reckoning ascend them.

His beefy bouncer walks past me without a single glance but when I looked up, I saw that David was waiting for my eyes to look into his. In that one brief moment, an eternity of lifetimes passed between us. Moments full of riding along the beaches upon the backs of white horses and feeding each other delicious morsels from awesome picnic baskets passed unspoken between the space that separated us.

Alas, this was not meant to be as he’s a married man (I don’t mess with any male who has even a hint of a wedding ring tan on his finger. Nuh uh, no way. Karma’s a bitch or so I hear) and I have my Clyde.

But we will always have that glance……AHAHAHAHAHA!!!! Damn, I should write cheesy retarded romance novels or something. I think I’d be good at that.

James Kyson Lee was awesome!! He was super nice and took some time to chat me up about my HTC Evo. Yes, I know this is a BlackBerry party. If you must know, the last phone I had WAS a BlackBerry….but then it died so I went with my current sexy beast of a phone.

Overall, the party itself (once you got there) was tons of fun. People were friendly and it was a pretty eclectic mix. Xomad did a pretty good job in that sense.

Okay….so here’s why I mighty morphed in the Hulk in my head and wanted to scream “BONNIE SMASH, YOU MOTHERF#@*ERS!!!!” all night.

First of all, the confirmation said to check in at the tables at 9:30 since the limos will be running till 11:30 or when they hit capacity. Okay….I don’t like being late. I also don’t want to be the idiot who likes to be “fashionably late” and ends up missing the entire party. I don’t care if I look like a dork because I’m the first person there. That means I can get my drink on and nibble on all sorts of awesomeness while everyone else is trying to get here. Win!! 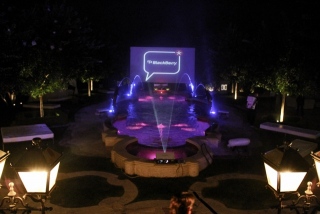 I make my way to a bunch of tables, introduce myself, tell them who my contact person is and show them my confirmation email. The brain trust manning the tables had no idea who or what I was talking about. I decided to call my contact again. She finally shows up and helpfully puts me BACK in line where I was to begin with.

So here’s the first messed up part. If I’m in FRONT of other people in line, that means I GOT THERE FIRST. Right? Doesn’t that make sense? It does to me….and yet I thought it was very strange when my contact person chatted up the GROUP OF 4 OR 5 BEHIND ME AND LED THEM AWAY TO THE NEXT AVAILABLE LIMO.

Mistake number 1, girlfriend. I never forget and hey, guess what? I’m going to write about it.

I already discussed my intense hatred of lines. I am not some kind of cattle. I either get in within a few minutes or I’m out of there. This is why I hate going to Hollywood clubs.

Second of all, I’m wearing 7 inch stiletto heels. Do you know how painful that is?

This includes hiking up mountains in the dead of the night. I’ll get to that in a little bit.

I flagged down my contact person and asked them what was going on. They said the limos they ordered either didn’t show up or they’re running late. By the end of the epic two hour wait, a shitload of people left. My dumb ass was still there because my friend was like “Well, we’ve waited all this time and they’re promising that they’re getting a shuttle here now. I feel like it’s such a waste to just leave now when we’ve already waited for so long.”

She had a point…so we waited some more. I watched them put people in cabs and random shuttles. Wow…..we went from limo’s to cabs and shuttles.

Forty people and I got crammed into a Hummer limo beast to end all Hummer limo beasts. This one had enough room in the back for a friggin’ hot tub. Whoa. Luckily there were these crystal flagons of vodka because I was in dire need of some alcohol by this point.

So we’re moving and I’m feeling a little better about the night. Yes, it’ll probably be midnight when we finally arrive to wherever this party is but, hey, I’ll get to wander around for an hour. In case you hadn’t noticed, I’m trying to stay positive instead of giving in to my dark urge to smash shit around.

All of a sudden, the limo comes to a stop. I figured this meant we’ve arrived. NO!!!! WRONG!!! 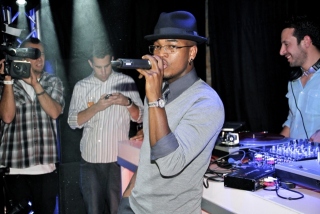 We were stuck on some hair pin turn going up the hills of Los Angeles. The Hummer Beast was slayed by turn because it couldn’t turn. It ultimately beached itself on the curb like some crazy mechanical whale.

So here is where my night went from Bad to Worse. I asked G (that’s what he said his name is but it’s not what I saw on his name tag. Whatever, dude) what’s going on and what we’re supposed to do now. He tells all of us to “walk up the mountain! It’s straight up there and around the turn! I promise you!”

Some of the ding dongs in my limo beast actually did what he said!! My friend is dragging me along because she wants to go to this party. I hike up the STEEP, DARK, UNLIT MOUNTAIN ROAD IN MY 7 INCH STILETTOS for about 30 feet before I refuse to move. There’s only so much light my poor phone can shed on the road in front of me and I’m not about to break my ankle, or worse, snap my heel for a party. I shake her off my arm and stomp my way down to G.

G says “Why can’t you f**king walk up the mountain like the other f**king girls? They did it wearing shoes like yours. Why the f**k can’t you?”

I’m stunned. Did this motherf**ker just cuss at me? I’m going to let this one pass because maybe I heard him wrong.

Very calmly, I explained that I am not like the other girls because I actually value my safety and the well being of my body more than gaining entrance to a party. Please tell me how you’re planning on getting me either up this mountain to the party or back down the mountain to my car.

Okay, you little midget. I’ve had it.

He ends up jumping in front of a cab and then all 5 of us cram in.

Once inside, G suddenly becomes very nice to me. So nice, in fact, he thinks we should have babies and start thinking of baby names.

In your nightmares, little freak.