Google Plus and The Revolving Doors Of Social Networking Sites

There’s a new kid on the social media block and its name is Google+. 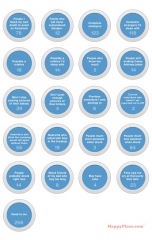 A lot has been going on these last couple of weeks and only now was I able to check out this Google+ thing. Thank you to the everyone who sent me invites. I wasn’t ignoring you, I swear!! I just had a bunch of stuff to deal with. ^_^

So. First things first. Once upon a time, people chatted. A lot. AOL (omg….), IRC and, for me, Asian Avenue. Then there was Friendster and it was good. Anybody remember Friendster? It was like high school all over again which is good for me because I wasn’t the coolest person in high school. Being in Marching Band as color guard AND being in JROTC tended to kill my ranking on the social ladder in high school.

And finally, there was Facebook and all was happy in the Kingdom of Bonnie until Facebook started getting stupid because it wanted to share my information. Screw that. I’ve since disabled as many options as I could because I want to ghost through it.

But now there’s a new kid on the social media block and its name is Google+. Hm. What can I say about Google+ except that it makes me scratch my head.

Facebook, in one of its many earlier forms, was simple to use. That was where it was GENIUS!! It wasn’t complicated and everything was laid out in a pretty organized fashion. Many many reincarnations later and, to me, it has become a bastardized version of its former self. It’s still relatively easy to use (hell, my MOM is on Facebook but she refuses to be my friend. * insert super sad face complete with Ultimate Emo Tear *) so I can’t complain too much.

That’s where Google+ differs. I cannot for the life of me figure out WHAT THE HELL IS GOING ON! Why are there so many circles? Wouldn’t boxes make more sense since that’s what it looks like in my head when I’m rearranging the people I know? Maybe they wanted to be all slick and suave by deeming the arrangements as “circles” in a nod to the term “social circles”.

I, however, don’t like to think that hard when it comes to social media. Twitter was already a near disaster in my early days especially when I was using it to flirt with the man who is now gonna marry my ass. Long story.

I don’t know why I thought Google+ would be easy to use. I guess it’s because their search engine is pretty simple in design and a definite no-brainer. I shouldn’t have ASSumed because it’s been about an hour and I still don’t know why my only friend is Clyde.

I’ve tried adding people by email to the existing circles. That didn’t work.

I then somehow landed myself on the page where there’s a whole buffet list of people who are either using Google+ or I’ve used some Google affiliated program to contact them. I tried adding those people to the existing circles. That also didn’t work.

I decided to try creating my own circle. That didn’t work.

Now I’m getting mad. I deleted my “Friends” circle because no one’s in there due to the constant error message I get when I try to add people. That worked. F*CK!!!!

I’m starting to turn in BonnieSmash by the time I started to add people to the “Create Your Own Circle” circle. That worked. Okay. I’m no longer seeing red. I’m happily adding my friends into that circle and all is good. I’m trying to rename it “Homies” when I get that stupid error message again.

Do your circles do what you want them to? If so I’m happy for you because I have now determined what Google+ reminds me of. I’ve decided that Google+, in its current testing stages, bears an uncanny, striking similarity to a pimply, sulking, skulking teenager in their adolescent shithead years because those damn circles are defying me. I can’t even bitch about it on Google+ because the status-update looking thingy isn’t working for me either.

Bonnie N. Clyde is a writer for YouBentMyWookie.com and the alias of the Supreme Commander / Ultimate Destroyer. When she hiding from people on Google+, she writes in her blog over at MissBonnified.com