Why I Agree With Anthony Bourdain – Paula Deen Is Dangerous

I’ve seen, first hand, what diabetes can do to a person. And knowing what I know as a nurse, I would run away from the products she endorses because I do not want to be like her. 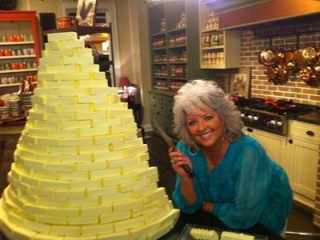 Depending on who’s asking, the letters after my name, RN, stands for “Registered Nerd” or “Registered Nurse”. That’s right. That’s my day job. Without getting too specific, I’m highly specialized in a certain specialty (wow…that sounded awkwardly redundant….sorry!!) in an intensive care setting.

I’ve cared for a lot of diabetics and have personally seen what diabetes can lead to. The most gruesome thing I saw regarding diabetes was when an ortho surgeon pulled me into his OR case, saying “Hey!! Nursing student girl!! Wanna see a cool case?” and was filled in on why the patient was in the OR.

It turns out, the surgery was for bilateral leg amputations due to raging, out of control diabetes. In other words, this particular patient did not take care of the disease and, as a result, will lose both feet.

I didn’t know what to expect because I’ve never seen, first hand, what diabetes could do to a person. I scrubbed in, donned on surgical protective gear, walked around the corner…and came face to face with two feet blackened from the effects of out of control diabetes and the dead tissue extended beyond the ankles up to both calves.

That was just the beginning. Then the surgery started. Without much ado, the surgeons began cutting off the legs. The finishing touch? Severing the muscles holding the legs together with what’s known as “the cake knife”. I got to bag the severed legs and almost passed out. I have never took a person’s leg away from them and put them in a biohazard bag.

I’ve seen how diabetes can interfere with things like wound healing and even stop people from doing things like take baths and cutting their toe nails. 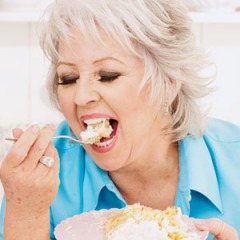 And now we come to Paula Deen.

I’ve never watched her show but I have heard of this woman who is the Queen of Butter and makes all kinds of “yummy” foods. For the record, I love bacon. I love cheesecake. I love cheese, I love pizza and I adore buffalo wings. I love Nutella but “yummy”, to me, does not always mean it must be deep fried, have either butter, cheese and/or sugar as the star ingredient.

I took a look at some of her recipes and immediately felt my heart lurch in protest. WTF?! Piggy Pudding?! What, exactly, about this says “I’m YUMMY!!! Eat me!” And is a Bacon Cheeseburger Meat Loaf REALLY necessary, Paula? Why not just eat a single bacon cheeseburger and call it a day?

You know, I think I’d be less irate had she started off her celebrity chef stint clean because I feel like her omission is the same as being dishonest. Granted, it’s difficult and hard to tell a public audience about a disease you might have but when you’re telling people how to whip up a batch of some craziness known as “Ultimate Fantasy Deep Fried Cheesecake”, you might as well help them out by including a way to search for their neighborhood cardiologist….or tell them that you have Type 2 Diabetes.

I’m reading The Guardian’s article on her and I agree. I’m not at all surprised she has Type 2 Diabetes.

What boggles my mind is how she can, with a clean conscience, keep her show and continue to tell people to how cook this stuff up as well as be a spokesperson for meat products amongst other things while keeping her disease a secret from her fans? These are the people who adore her! Doesn’t she feel any kind of responsibilty to them BEFORE becoming the new face of a diabetes medication? 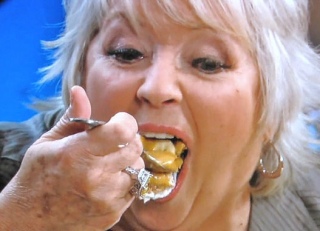 Knowing what I know as a nurse, I personally would run, not walk, away from the products she endorses because I do not want to be like her. Maybe I should clarify. I think she’s a savvy businesswoman who has found a way to turn her “yummy” recipes into a way to fatten up her bank accounts. I admire her talent for turning a profit but that’s about it.

Here’s a thought for you, Paula Deen. Why not be a spokesperson for how to live with Type 2 Diabetes but still eat well? By “eating well”, I don’t mean drenching everything with butter or make sugar an absolute staple in every recipe. I mean featuring veggies in a way besides as a garnish. I mean finding alternative ways to enjoy tasty foods without hollering for the deep fryer and maple syrup.

Why not have your show focus on how to ADAPT ALL YUMMY AND TASTY SOUTHERN COOKING in a way that still captures its delicious flavors but without the side order of possible heart attack? Sure, Bobby Dean is now revising some of his mother’s recipes but I see that as too little, too late.

The problem is with her.

SHE’S the one with Type 2 Diabetes, not him (that we know of). I feel like if anyone should be the one doing the revamping, it should be her.

I ask again. Why be the face of a new diabetes medication when you could be the face for healthy living and give hope to all those who have Type 2 Diabetes? Could it be because it’s less lucrative?

At a time when we, as a nation, are battling problems like obesity, diabetes and seeing kids being diagnosed with the same things, what I want to know is why Food Network thought it was a good idea to keep her current show, the way it is, on the air?

Yes, she’s right. She’s a cook, not a doctor. Yes, people are ultimately responsible for making their own choices. However, I see something wrong with cheerfully peddling foods high in fat and sugar and low in nutrients to the general public while hiding the fact that you have Type 2 Diabetes.

And now she’s the spokesperson for diabetes medication? Way to laugh all the way to the piggy bank, Paula Deen.

Bonnie N. Clyde is a writer for YouBentMyWookie.com and the alias of the Supreme Commander / Ultimate Destroyer. When she isn’t bagging hacked off limbs as a result of diabetes, she writes in her blog over at MissBonnified.com