My So Called Encounter With Prince Charming And His Horse

You know how all girls dream of being swept off their feet by some dashing Prince Charming on his white horse? Yeah. I can say I sort of had that happen to me… except it wasn’t with a Prince and his horse wasn’t white.

I saw the video posted recently about the wild turkeys in New Jersey. I was a little confused because I was thinking about the bourbon with the same name. Who knew the liquor AND the fowl could both be so foully volatile?! Sorry, I couldn’t help it with the “fowl” and “foul” thing. I couldn’t pass up on the chance for word play. On a side note, I don’t think it’s ever a wise idea to name a liquor using the word “Wild” in it because it could mean a lot of different things. The implications are as follows :

1. You had a WILD night and now you can’t remember any of it. You’re forced to utilize the memories your friends have of you and pray that you didn’t do anything that would get arrested in various states and/or countries. However, if you find that you woke up with your ass in prison, I’m pretty sure it’s safe to assume you did do something that got you arrested. Tsk tsk.

2. You had a WILD time trying to keep everything you ate/drank down and succeeded.

3. You had a WILD time trying to keep everything you ate/drank down and totally epic failed at it.

* disclaimer : I’m not implying Wild Turkey bourbon will do any of this. Any kind of liquor mixed with someone who can’t handle their alcohol will more or less give you the same result but let’s hope this doesn’t happen. Friends not only don’t let their friends drive drunk but they also don’t let friends make total asses of themselves…unless you have the kind of friends who like to take blackmail footage of you drunk out of your gourd and then post it to YouTube. If you have friends like these, I don’t know what to say to you except maybe you should drink responsibly and/or make sure your friends don’t have their phones on them. This ends my community announcement for the day. *

After seeing this video, I am totally convinced the makers should’ve picked a different name because I forever associate their product with these crazy turkeys. You know that old saying? “You are what you eat”? Yeah…somehow I don’t think it’s very sexy to be known as a Wild Turkey. Nope. Not at all. You want to sell your product, not have the name of it scare off potential clients….unless you happen to be going for that particular niche of super crazy frat boys. If that’s the case, then hey. Have at it.

I am making a mental note to never visit this place. I don’t feel like being accosted by something I’m gonna eat on Thanksgiving. I’m getting the impression that citizens of this town tuck into their Thanksgiving dinner with a little more glee than the rest of us. Revenge is best served carved up with gravy on top and a side of cranberry sauce. Yum yum.

You know, I don’t think I’ve ever had an experience like that with animals or birds. ….oh wait!! I take it back! I do remember something I apparently tried to block out from when I was little. You know how all girls dream of being swept off their feet by some dashing Prince Charming on his white horse? Yeah. I can say I sort of had that happen to me….except it wasn’t with a Prince and his horse wasn’t white. It was with NYPD and the horse was a lovely chocolate brown with an espresso colored mane and tail.

It was my first trip to New York City. I think I was 6 or something because I remember the hemline of my mom’s coat was about eye level. We had just finished eating lunch and we walked outside the restaurant when my horse crazed ass saw cops on horses. I immediately wanted to touch the horse.

All chicks have this weird thing for horses. I have no idea why. I just know we do and I’m not exempt.

My parents walked my sister and I over to the policeman, explained that we’re tourists and that their crazy daughter loves his horse. They asked him if I could pet it and the super nice officer let me. While I’m petting the horse, my parents were distracted by something my sister was saying and so they shifted their attention to her. I guess they figured I’m safe because I have this totally awesome officer looking after me. 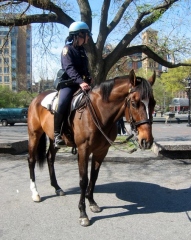 His horse and I apparently bonded because when it was time to go, the horse wouldn’t let me leave. My parents called for me because we’re about to leave and I started to follow them…and that’s when everything took an interesting turn. My family started walking off in one direction but the horse decided he wanted to keep me. I know this because I heard this weird whinny in my ear and the next thing I saw was his gigantic teeth coming near my face. I almost freaked out because I thought he was going to bite me but that wasn’t the case. He ever so gently gathered of my puffy pink jacket’s furry hood in his teeth and started slowly walking in the opposite direction….with me in tow struggling to keep up on my tippy toes.

I was too short for the officer to see me so we almost made it down the block before he finally figured out why his horse was walking so funny. It was because his horse had decided to keep the little Asian girl as its pet. My parents at this time were completely frantic and turned just in time to see me being dragged down the block…by a horse who had a mouthful of my coat in its mouth

The officer finally got his horse to stop (after he nearly fell off from laughing. Gee. Thanks) and waited for my parents to catch up. It took a while but the horse eventually gave me back to my parents. To this day, I can’t figure out if that horse really liked me or if he just really liked my coat and wanted to keep it. What I will say though is from that day on, every time I see a cop on a horse, you’ll always hear me whisper “good horsey…nice horsey….” I also stopped wearing puffy pink, faux fur trimmed coats too. Just in case.

Much love for all those who keep us safe even though you also give me speeding tickets. I still have love for you. For all you ladies out there who want to catch yourself one of those boys in blue, if he happens to be the kind who’s on a horse and not strapped down in a car, give the pink coat a whirl. You just never know where that’ll take you.

Bonnie N. Clyde is a writer for YouBentMyWookie.com and the alias of the Supreme Commander / Ultimate Destroyer. She also has a blog over at MissBonnified.com where you can read more of her musings as a gifted storyteller and as a Love Guru despite being chronically single.