How I Rang In The New Year – With Booze, Lots And Lots Of Booze

Aaah…..the smell of a new year…. Strange that it smells mostly like coffee but whatever…

Aaah…..the smell of a new year…. Strange that it smells mostly like coffee but whatever. Coffee smells great and always manages to perk my sleepy ass up. So what have you guys done so far this year? Did you guys have a great time ringing in the new year?

I did….and so did the rest of our friends who came over for the first ever Bonnie And Clyde New Year Party. What was supposed to be a chill, get-together at our house turned into something completely crazy. We started out civilized enough (proper glassware for the multiple bottles of wine, tequila and Jameson) but somehow, by the end of the night, we were drinking out of salad bowls and straight out of the bottles.

Things started to get a little crazy when we killed the bottle of Patron in the span of 15 minutes while I played the most appropriate song I could think of – Paradiso Girls’s “Patron Tequila”.

I love this song.

The dubious mix of Patron, Jameson and red wine makes my girlfriends and I do really weird things….like reenact parts from Sh!t Asian Girls Say. We decided to take a bunch of pictures with the typical Asian Girl poses. It was awesome. 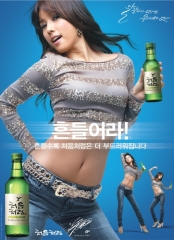 Things really went downhill when I made Keyla’s boyfriend drink Patron out of the Penalty Bowl because….I forgot why. Somehow, that turned into the norm. The bottles of Patron and Jameson didn’t stand a chance. At this point, there was a few bottles of wine left….and that’s when a light bulb went off in Clyde’s head. I was wondering where the husband went when I heard him roar with triumph and I see him raising that evil green bottle we had shoved in the back of the fridge and forgotten about above his head as he screamed “WE MUST FINISH THIS TONIGHT!! BRING YOUR BOWLS, BOYS!!! WE’RE HAVING A DRINK!!!”

In case you don’t know what soju is, it’s the Korean liquor of death. It’s looks innocent enough but GOOD GOD, that stuff is lethal.

Minnie and I watched my normally very mellow husband turn into the Korean Tasmanian Devil as he emptied the soju bottle with the other guys. “Bon Bon, now I know why you married him”, was all that she could say to me.

After that, it was game over…but not before Minnie, my husband and Keyla’s boyfriend decided to walk down the block to the liquor store to bring back a bottle of Johnny Black. The last thing I really remember clearly was all of us screaming like banshees as we counted down the last 10 seconds of 2011 and then we all screamed something in Korean that roughly translates into “LET’S DO IT!!!!”

I don’t know why that was the battle cry for the night.

I considered the whole night a success because :

1. We managed to pop open all 3 bottles of champagne without anyone losing an eye or damaging the walls/ceiling/floors/furniture.

2. There were 4 passed out bodies on my floor and on my couch. I even had the presence of mind to cover them up with blankets without tripping and falling over them. WIN!!!!

3. Despite being in a complete drunken haze, Clyde and I managed not only to pack up and put away all the leftover food in the fridge NEATLY

(all those years of playing Tetris FINALLY proved useful! Take that, all you people who say video games are a waste of time!!!)

but we also disposed of all the trash, washed all the dishes, glasses, bowls and wiped down all the tables and countertops. This is a definite pro of partying in your 30’s versus your 20’s. If we were in our 20’s still, I’m pretty sure the house would still look like a disaster today.

4. There was regurgitated bits of premium cold cuts, prosciutto and salami in my bathtub. You’re probably asking yourself why I consider this a success. Simple. It’s because the meat was mostly digested and/or chewed really well because it didn’t clog my drain when I rinsed everything down the drain and when Clyde scrubbed out the tub. I also consider it a success because my friend didn’t throw up on the floor. WIN!!!!

5. Everyone made it home after spending the night thus ensuring the sobriety and safety of all our friends. Friends don’t let friends drive drunk.

Now that I have one successful house party under my belt, I think I’m ready for another. Superbowl house party, any one? ^_^

Bonnie N. Clyde is a writer for YouBentMyWookie.com and the alias of the Supreme Commander / Ultimate Destroyer. When she isn’t getting hammered with her new Husband, she writes in her blog over at MissBonnified.com