I grew up falling in love with Edward Scissorhands and could not understand why my mom wouldn’t let me marry someone like him when I grew up. 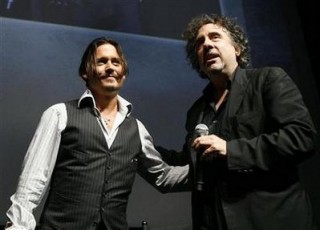 You know, to be completely honest, I am a total fangirl of Tim Burton. I grew up falling in love with Edward Scissorhands and could not understand why my mom wouldn’t let me marry someone like him when I grew up. My love for his work only deepened with Sleepy Hollow, Nightmare Before Christmas and Corpse Bride.

To say I was ecstatic about this interview is like saying “I want to go to Disneyland” after winning Gold in the Olympics.

I have to say he’s pretty normal. Well….as normal as one can expect from the guy who gave us Sweeney Todd. One minute, he wasn’t there and then *poof*, like magic, he appeared like a floating black cloud. I say that only because the man was dressed from head to toe in black…and I didn’t think he walked so much as floated. Maybe it was because he had super wispy hair. I’m not sure. I have to think more about this. The black cloud part is easy to explain because of what he was dressed in. Large black sunglasses shielded his eyes, black coat, black trousers and dusty black boots. I didn’t get to see his socks.

Questions immediately flew fast and furious under the expert direction of the moderator.

Yours truly got to ask him two questions. Count ’em. Two. I think the school girl outfit helped me stand out so it was kind of hard to miss me jumping up and down for a chance to ask him a question.

According to Mr. Burton, the challenge in telling the Alice story was to give an emotional framework that wasn’t present in the other versions. This emotional connection was what he felt was lacking for him personally and this was what he wanted to bring to the table by giving it a strong, dream-like quality that was also, in his opinion, absent in all the other movie versions.

Disney came to him with the project and he decided the material was a good elements so he wanted to try come up with a newer version.

What he also wanted to do was to not present the Alice story as one girl wandering from one crazy character to another but to present it as a story. He was very clear that this isn’t a sequel. He chose elements of the books and wove them into a story.

He discussed the methods used in creating the movie. 3D wasn’t an option for a few reasons. Some of those reasons were :

1. Time. They didn’t have 5 – 6 years to make a 3D movie.
2. The techniques they used (pure animation, live action, etc) gave them more freedom to achieve the layers and depth needed in fulfilling the feel of this particular story within the time frame they had to work with. 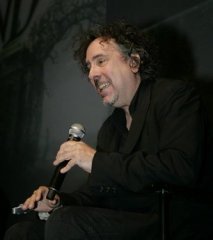 Tim felt it was “more pure” because when he thought about what they were doing, this was the best way to tell they story what with “the spatial relations, the weird spaces and places she goes” in this version. He didn’t want to do motion caption because of personal preference but he also added that one medium is not better than the other. It simply boiled down to personal reasons and what was right for the project.

One lady asked the funniest question. She was trying to figure out if there was some kind of romantic connection between the Mad Hatter and Alice in this telling of the story. Tim sat there for a second and said “I wouldn’t say that because Alice is just a little girl….please!” Ahahaha!

He chose Mia Wasikowska for the role of Alice because he wanted someone with gravity to her. Alice was always seen as just a precocious girl but not in Tim’s version. He wanted the audience to see the internal life within her and found that Mia was able to lend a quiet power to her.

Tim joked about how he got Johnny on board for the movie. “He was just wandering outside the studio dressed as Jack Sparrow and …hahaha”. Just kidding. The Mad Hatter is an iconic character but most of the other versions have focused primarily on the fact that’s he’s nuttier than a factory making peanut butter (I’m liberally paraphrasing Tim here). Johnny’s goal was to flesh him out and bring out the more human aspect of the Mad Hatter.

Speaking of dressing up, Tim will only own up that dressing up in costume is a very private affair (“ha ha ha”) but has determined that being in costume allows the person to learn a lot about who they are.

There’s a sense of artistic freedom, which Tim is very much about, and thinks dressing up should be something done more often and not just for Halloween.

As for any new future projects, Tim Burton did say “Dark Shadow is not a rumor. It’s the plan for that to be next”.

With that, the interview with my hero….I mean…Tim Burton was over. Because I had managed to scoot myself closer to him so that I could better hear his answers, I got a really good look at his socks. They were awesomely black, white and stripey. Awesomeness beyond all that is awesome.

One thought on “SDCC 09: Interview With Tim Burton, “Alice In Wonderland””