Once A Cheater, Always A Cheater – Why ‘Man vs. Food’ Is Not My Friend

There is nothing more sad than two people sitting on a couch and drooling over what they see on TV. 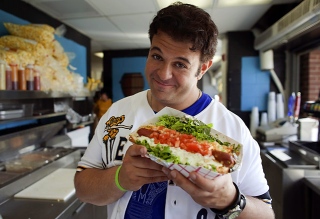 There is nothing more sad than two people sitting on a couch and drooling over what they see on TV. Those two people I’m talking about are myself and my fiance, Clyde. You see, we are taking our engagement photos this weekend. This means we’ve been eating like the people competing on “America’s Biggest Loser” for the last two months because we’re vain and we want our inner supermodels to shine through.

Unfortunately, this means Barney the Tapeworm (I have an imaginary tapeworm. His name is Barney) has not seen a slice of pizza since….since….the first weekend of February. Wtf. I used to have the number to Pizza Hut on my speed dial AND memorized.

So here’s a list of foods we haven’t been letting ourselves eat :

– pizza
– fried chicken
– fried ANYTHING
– things heavily featuring cheese (this means no mac and cheese. lasagna, GRILLED CHEESE SANDWICHES….you get the point)
– processed foods (we can’t even eat deli meats)
– BACON (….I was so sad….)
– anything too greasy (this eliminates most food on most restaurant menus)

Here is what we’ve been eating :

– veggies (TONS of these)
– lean proteins (lean cuts of pork, chicken breast, lean cuts of beef)
– fish
– sashimi
– soups
– Japanese style curry
– beef stew with pounds of fresh veggies and not too much beef (I know, I know!!)

We’ve actually been pretty good and I have seen myself slim down considerably. However, there was a few occasions in which we’ve slipped…and all of them were when we were watching Adam on “Man vs Food”. We’ve watched so many of them, I’ve figured out :

– exactly how many pounds of food he can eat (5 pounds for sure. There have been a few instances in which he was able to somehow cram 7 pounds into his gut. That’s the size of newborn infant, by the way)

– his weaknesses (burritos. I think he’s only been successful in one burrito challenge. Also, anything that heavily features carbs like potatoes and pastas)

– his strength (desserts, meats and anything with hot sauce)

There was one episode where he was attempting to attack a 7 pound burrito somewhere. We sat there drooling on the couch and muttering like zombies under our breath. Instead of craving brains, we were craving something else that started with a B – burritos. We watched him demolish pounds of chorizo, eggs, potatoes, bacon, veggies and 4 tortillas before we were unable to be faithful to our diet.

We hopped in the car and drove to the nearest taco joint. We ordered our food and skulked back to our living room with our ill begotten booty. My burrito weighed in close to two pounds. It was an all meat monstrosity with pico de gallo and guacamole that was barely held together with the jumbo sized tortilla. I ate the whole thing in under than 10 minutes. * burp *

It was so good….but I felt so bad for giving in!

You’d think the guilt I felt for cheating on my diet would shame me into not doing it again, right? WRONG!!! SO WRONG!!!

This is why the saying “Once a cheater, always a cheater” is so true!

I tried to stay away. I really did but the lure of images of all my forbidden foods called to me and I was helpless to resist. I had already broken the seal so cheating the second time was much easier. The second time was very much like the first. Clyde and I were torturing ourselves by watching episode after episode while drool escaped our lips. We hated on Adam for being able to stuff his face with mounds of bacon (I think bacon is the official food of the gods), pork cutlets, buffalo wings, all things fatty and fried. We loathed him for enjoying all the things we couldn’t. 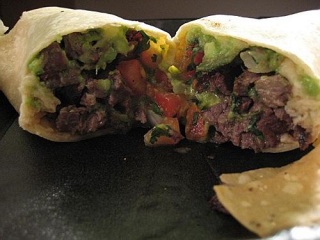 That was when we decided on yet another taco run. We both ate an all-meat carne asada burrito with guacamole and salsa at the restaurant. We took home another burrito and 4 tacos to enjoy later on. I can’t remember the last time something tasted so good! We tried to tell each other it was okay because the meat wasn’t fried, it wasn’t * too * greasy and, if you don’t count the massive tortillas, it was pretty low in carbs. Yes, we were completely delusional.

Alas, our cheating ways is not only with delicious Mexican food. We watched an episode where he was at the Jersey shore and eating gelato. This sparked a craving for froyo so we headed to the nearest Pinkberry. We both got a large heaped with toppings. He was pretty good and stuck with fresh fruits. I had mochi, yogurt chips, blueberries and a heaping serving of warm, melted milk chocolate.

We scarfed down our tasty treats…and brought home a large, take-home container of more PinkBerry yumminess. We polished that off in less than 30 minutes within crossing our doorstep. I know because we’re on a “Law And Order : SVU” marathon and we managed to eat the whole thing before Elliot and Olivia put the cuffs on the pervy perp.

Damn you, Adam!!! You’re the cause of our wedding diet angst! Yeah, I know we imposed it upon ourselves and no one is making us watch your show but still!!! /end-irrational-rant-born-out-of-hunger

I am so happy to say we’re taking our engagement photos this weekend. One of our outfits is something we got from Think Geek. Clyde knows me so well. Once I saw the shirt, I had to have it. It was the most awesome thing I’ve ever seen. Pictures of the shirt to follow later.

We already decided to change our diet for the next few months to allow ourselves at least one meal a month in which we can indulge. We’ve already decided upon our Guiltless Dinner Of Awesomeness for March – a large, extra cheese pizza with everything on it and fried chicken. God, I can taste the grease and feel our arteries clogging now.

Bonnie N. Clyde is a writer for YouBentMyWookie.com and the alias of the Supreme Commander / Ultimate Destroyer. When she isn’t cheating on her diet and then blogging about it shamelessly, she writes in her blog over at MissBonnified.com