‘The Killing’s’ Season Finale Killed Me!!

What to do….what to do….I can’t believe I got so worked up over a friggin TV show. Thanks, AMC. 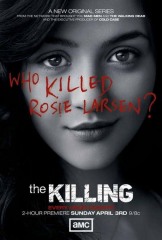 I started watching the American remake of The Killing and loved it. Actually….it’s more like I was obsessed with it.

This show is full of twists and turns. Just when you think KNOW BEYOND A SHADOW OF A DOUBT who the killer is, something else happens and you realize that you were so wrong….or were you? Talk about wriggling like a worm on a hook.

I couldn’t get enough of it. Every Sunday found me bouncing impatiently on our sofa because I wanted to watch the latest episode 5 days ago. I even Googled it to see how many episodes there are in a season because I figured we’ll FINALLY know who killed Rose Larson.

There are thirteen episodes. The last episode aired this Sunday (which, eerily, was Father’s Day. Whoa….trippy….). I was glued to the TV screen.

Things I were yelling included :

I KNEW IT!!! I KNEW STEPHEN HOLDER COULDN’T BE TRUSTED!!!! I KNEW HE WAS A SLIMY OTTER FROM THE BEGINNING!!!

But never Ever EVER did I think Season One would end the way it did – in an epic cliffhanger.

I stared in disbelief as the credits rolled. I kept muttering “No….no…..this can’t be it….there has to be more!”

Call me weird for glomming myself onto a fictional detective but I really grew to like her. She’s not perfect but she really cares. She even lost her fiance because of this case!! Good God, at least let the damn fictional detective lady solve her case! Is that too much to ask??!!

I thought I was the only crazy nut who ended up in a complete berserker rage but apparently I’m not. I feel better.

I can’t find the review or comment anymore but Clyde was done laughing at me, he read me something about a similarly distressed fan was skulking about their living room while ranting and raving at their cats about how they, too, couldn’t believe the ending of the last episode.

Part of me wants to watch the original Danish series because I need to know who offed Rosie. At the same time, I kind of want to watch Season 2 because I really like the characters in the American remake.

What to do….what to do….I can’t believe I got so worked up over a friggin TV show. Thanks, AMC.