“Wow. That was creepy.” Stephen King, Eat Your Heart Out

I’m beginning to think I know how Stephen King gets his inspirations for his vividly creepy and skin crawling stories. I think he gets it from his dreams. 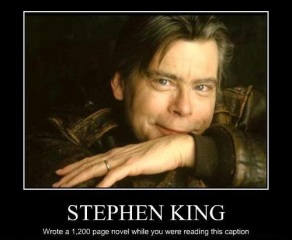 I’m beginning to think I know how Stephen King gets his inspirations for his vividly creepy and skin crawling stories. I think he gets it from his dreams. I had the weirdest dream yesterday and, when I woke up, I told Clyde. After I was done regaling him with my dream, he’s silent for a few seconds and said “Wow. That was creepy”.

So here was the dream.

My coworkers somehow talked me into going on a work retreat in a small, quaint little sky town. This town is very picturesque, very small and very isolated. Not exactly the kind of place I normally like to visit but I figured “What the hell? Why not”. The trip up the mountain was otherwise unexceptional minus the crazy blizzard. We settled in and got ready for dinner.

That’s when I first noticed things were a little weird. There were these groups of really adorable little kids who were just….off somehow. I couldn’t explain it. They seemed very well behaved but you know those kids you see where they act polite but you know they’re secretly thinking about all the salt they dumped into your garden? Yeah, those kids.

So I did what any concerned adult would do. I followed them around. I then learned that the whole town was run by an evil cult. They would jure the tourists to their remote mountain and slaughter them. Those that were deemed worthy were stripped of their organs which were then eaten by the cult members.

What I perceived as “children” also weren’t children. They were some kind of subspecies that developed as a result of inbreeding, the extreme high elevation and being so isolated from the world. They also had these crazy alien technology weapons that they used to further their agenda.

I watched as one cult member rip the heart out of his best friend because his best friend was pure of heart. He happened to be a member of the other cult who focused on all things good. It was too late to save the best friend so I followed the evil little squirrel to this abandoned rec center. I thought I was being totally slick and 007 but it turns out my presence not only was known from the beginning but that I was selected.

The doors slammed shut behind me and I found myself surrounded by a group dressed in white. Their leader, Ottowanuka (I swear, this was the name I heard in my dream) reminded me of Optimus Prime in a way.

They confronted the evil cult leader and there was this epic battle.

Alien weapons were flying, I was sure I was going to die but Ottowanuka took the death shot meant for me and died.

Before he passed away, he revealed to me that I was the Neutral One foretold by legend. My role was to be the one who would turn the tide in this long war because I would be the one who would break the balance. The Evil One (the one I thought of as the horrible squirrelly little kid) was hoping that I would fall under the spell of the great power his cult wielded over the people and would join their cause.

But Ottowanuka knew better because he saw in me compassion. With his dying breath, he passed on to me all the skills and lessons he learned and gave me his weapon. I felt like the Matrix was just passed on to me. I promised not to let him down and proceeded to whoop some ass.

Bonnie N. Clyde is a writer for YouBentMyWookie.com and the alias of the Supreme Commander / Ultimate Destroyer. When she isn’t sleep ghost writing horror novels, she writes in her blog over at MissBonnified.com

The little idyllic town, it’s residents and the world were now saved….but I was saddened by what happened.

I decided to stay in the town but I would need a place to stay. A beautiful woman offered to show my new husband and myself a property she knew would appeal to us. If we were to purchase it, we would also purchase the quaint little town bar directly below our apartment. Sold!!

We toured this beautiful, Old World space and I loved it. As I turned to tell her how gorgeous the property was and that we’ll take good care of it, I noticed the sad expression on her beautiful face. Before I could ask her why she looked so down, she said she’d like to show us the feature of the home she fell in love with.

She led us to a small enclave tucked away towards the back of the loft. It looked like a pair of small, wooden shutters expertly nailed into the wall. I couldn’t figure out what it was since I knew it wasn’t a window but I figured I should compliment it if only to bring a smile to her face. As I was opening my mouth, she swung open the pair of mini doors.

What I saw was a perfect, miniature piano the size of my hand. There was a tiny cabinet in there also. I watched in fascination as she carefully opened the doors to the cabinet to reveal a collection of small, crystal flagons.

“At the height of noon, always choose the one as pure as water”, she murmures as she selected a flawlessly cut crystal decanter. She turned to me and said “Fill it carefully with the best liquor you have. Lean out over the window and pour its contents into the rose planter below. You will then see why I love this place.”

I poked my head out of the window to see the ledge of roses. They were beautiful! As I pulled myself back into the room, I saw that she had disappeared. Over the next couple of days, my husband and I moved in and settled ourselves into our new life in this new town.

One day, I was bored and decided to do what the lady said. I opened the little cabinet and filled the flask with the best liquor in the house. At that point, I heard the little piano begin to play by itself. It didn’t do that the last time. I was a little weirded out but I decided to go through with it. As I leaned over, I saw that the beautiful but sad lady was by my side.

Silently, we watched the drops hit the roses and immediately more roses began to bloom. So many varieties exploded out of that soil but my attention was split between two things that happend concurrently. There were two different flower species that started to bloom amongst the roses. Don’t ask me how but I knew the names of those flowers were Amy and George. I also knew that these two flowers only bloomed here, in this ledge full of roses.

That was the first thing I saw. The second thing that caught my attention was the pair of children that suddenly materialized under my window. They were dressed up in the style of the 1800’s and I watched them play together. Just as quickly as the flowers bloomed, they wilted and died. As they faded and dried up, so did the images of the children. They began to fade from my world.

I turned to the woman and said “I know why you love this place. Those flowers….Amy and George….those children below….they were your children weren’t they?”

I watched as she nodded and as she came closer and closer to where I stood with the crystal in my hand.

I’ll never know why she wanted us to live there nor her reasons for showing me how to summon her long dead children because I, thankfully, woke up.