In anticipation of the opening weekend next week for Edgar Wright’s “Scott Pilgrim Vs. The World,” we are bringing you an epic of epicness Scott Pilgrim swag giveaway!

In anticipation of the opening weekend next week for Edgar Wright’s “Scott Pilgrim Vs. The World,” YBMW has teamed up with Universal Pictures (LBi) to bring to you an epic of epicness Scott Pilgrim swag giveaway! One lucky YBMW reader will get the chance to win:

– (1) Removable sticker to put on back of most cell phones 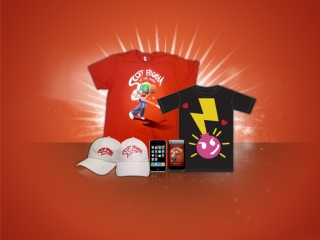 To enter and win yourself some epic swag, all you have to do is fill out the form below and follow us on either Facebook or Twitter:

No purchase is necessary. Winners will be selected randomly from all valid and correct entries. The epic of epicness Scott Pilgrim swag giveaway ends August 18, 2010.

Question: Would you ever fight seven evil Exs to be with the girl/boy of your dreams?

One thought on “YBMW And Universal Pictures’ ‘Scott Pilgrim Vs. The World’ Swag Giveaway!”