‘Boy Falls From The Sky’ – First Song From ‘Spider-Man: Turn Off The Dark’ Musical + Costume Designs

The song is written by U2’s Bono and The Edge and really has that distinct U2 sound. Which means it may or may not totally suck.

The song is written by U2’s Bono and The Edge and really has that distinct U2 sound. “Spider-Man: Turn off the Dark” has a $50-60 million budget and producer Michael Cohl recently told the New York Times that he’s doubtful he’ll be able to recoup the budget from the very ambitious show that’s been plagued with problems.

Aside from the very first song unveil, we also have images of the new Green Goblin costume design as well as a new villain “Swiss Miss”…

“Spider-Man: Turn off the Dark” debuts November 14 on Broadway’s Foxwoods Theatre rain or shine. I’ll admit I kind of like the new song, but the costumes… wow, good luck recovering that $50-60 million budget. Seriously, if it weren’t for the song debut, this really would have just gone in the WTF section. 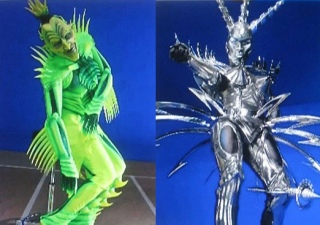