If you saw Breaking Bad last night, and I hope you did, you might have noticed Jesse’s friend Badger go on a rant about a Star Trek script that he had written. In it, the crew of the Enterprise enters into ship wide pie eating contest.

Now, just 18 hours after the show has aired, an animated version of his tale has popped online.

Here’s what Vulture had to say about it, followed by the actual, animated clip.

Badger’s Star Trek pitch (fact-checked by a Trek expert here) was dreamed up early in the writing of this last half of the season, when Gould and fellow Breaking Bad writer Gennifer Hutchison got into it over the true operational nature of the Trek transporter. The debate between Badger and Skinny Pete over how it works was lifted straight from their conversation. Gould, who said he was “a real Trekkie” as a kid, said he was the Skinny Pete in the argument: “I don’t want to go on a transporter because it’s essentially taking you apart and putting you back together. But Genni made a pretty good argument that that would mean there were literally 100 Captain Kirks.” He decided their debate (which no one won) was a natural way to get Gilligan’s gory lesson in transporter abuse on the show. “It would be the ultimate diet, really. Eat anything you want, and then Scotty beams it out of your stomach,” Gould said. “But like with great technology, there are terrible things that can go wrong.” 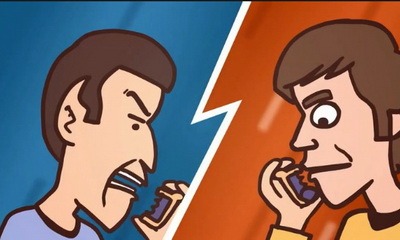