Fans were heartbroken at the recent news that Studio Ghibli would be closing it’s doors, but they’ve still got at least one or two films left to release before they turn the lights out. Today we’ve got the first English trailer for their upcoming film, The Tale of The Princess Kaguya. The animation style is a big departure from the studio who made it’s bones on films like Laputa Castle in the Sky and Howl’s Moving Castle, but it’s still unmistakably Ghibli.

The Tale of Princess Kaguya hits US theaters on October 17th.

Official Synopsis:
Legendary Studio Ghibli cofounder Isao Takahata revisits Japan’s most famous folktale in this gorgeous, hand-drawn masterwork, decades in the making. Found inside a shining stalk of bamboo by an old bamboo cutter (James Caan) and his wife (Mary Steenburgen), a tiny girl grows rapidly into an exquisite young lady (Chloë Grace Moretz). The mysterious young princess enthralls all who encounter her – but ultimately she must confront her fate, the punishment for her crime. From the studio that brought you Spirited Away, My Neighbor Totoro, and The Wind Rises comes a powerful and sweeping epic that redefines the limits of animated storytelling and marks a triumphant highpoint within an extraordinary career in filmmaking for director Isao Takahata. 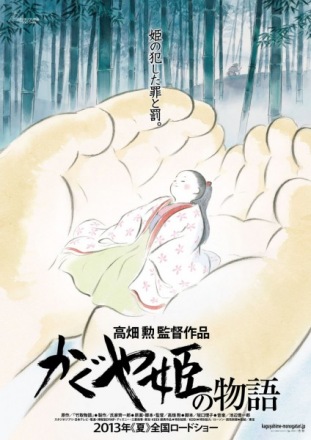