At the heel of “Twilight’s” success, Disney has optioning the rights to “Fallen.” A story about a girl who is romantically torn between two lovers who happen to be… fallen angels 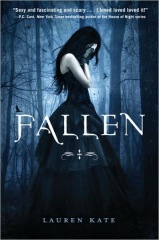 At the heel of “Twilight’s” success, Disney has a new trump card up their sleeves by optioning the rights to “Fallen,” a young-adult novel by Lauren Kate.

“Fallen” tells the tale of an alienated girl finding herself romantically torn between two lovers who happen to be… fallen angels, and have been battling over her for centuries.

Disney’s latest literary acquisition is hoping to tap into some of the greens generated by the same tween romance formula that makes “Twilight” so popular. The novel, released just this week by Delacorte Books for Young Readers, is part of a four-novel series, all of which were included in the deal.

While it’s still way early for a director, writer or any casting news, rest assume Disney is already hard at work finding the right cast to play the angelic suitors.

Move over vampire and werewolves, fallen angels are coming!