‘Back To The Cutest Girls In The World, I Wish They All Could Be California Girls’

Years ago, the women actually looked like women because they had curves where we’re supposed to have them. Now a lot of females are just really thin. 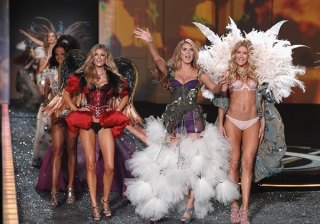 Once upon a time, it was unthinkably scandalous for a woman to show so much as a brief glimpse of ankle or a flash of bared wrist. Fast forward to today, we have women parading down catwalks clad in nothing but wisps of a prayer hanging on for dear life by the grace of a few slivers of strategically placed lace. In other words, they were showing the world what their momma gave them while wearing underwear and lingerie.

That’s right. I watched the Victoria’s Secret Fashion Show (also known as Bonnie’s Inspiration For Hitting The Gym Again) and it was definitely different than what had come before.

Years ago, the women actually looked like women because they had curves where we’re supposed to have them. The show I saw the other day via YouTube showcased a lot of females who were really thin.

The only curves I saw on them were the outlines of ribs, iliac crest (that’s “hip bones” to you) and unnaturally large globes of joy mounted front and center.

Call me old fashioned but I liked watching the curvier women better because, to be completely honest, I felt a little weird watching the uber skinny ones marching by. Their figures reminded me of the way I looked when I was a tall, scrawny, 12 year old girl minus the boobs. In other words, I felt like I was a lecherous old man spying on prepubescent girls running around in their underroos…except I’m not a lecherous old man and I don’t have a thing for underage people. 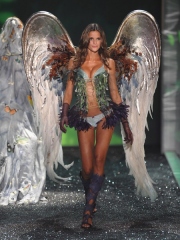 Nick Lachey’s old boy band, 98 Degrees, was on to something when they came out with that song. To be more specific, Victoria’s missing an angel and that’s her secret for this year. What made the 2009 show especially interesting was the reality TV show element they introduced to the show. Never before has Victoria’s Secret gone on the hunt for a new Angel to add to their stables in this manner. 10,000 hopeful wannabes all competing for the chance to wear the coveted wings of the Victoria’s Secret Angel. And then there were 10. From the 10, only two were left standing.

Jamie Lee Darley and Kylie Biscutti. And guess what? Both are from CALIFORNIA!! Hell, yes. Don’t mess with the best.

I know Kylie was the one who beat out the rest of the girls but you know what? I was really hoping Jamie Lee would’ve been the one who won those coveted wings. She’s chill. She’s humble. She worked hard in all the events and even garnered praise from that super tough but slightly creepy trainer in the segment where they got to taste what it takes to have an Angel-worthy body.

Oh wait. Duh. This is a MODELING competition. No wonder she lost to the chick who said that if we voted for her, she would give us her sexiest, most confident walk.

Good Lord. Get over yourself. 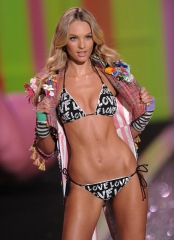 Is it really obvious that I wanted to see Jamie Lee win? I’m actually not a hater. I’m happy one girl’s dream came true as tens of thousands more had theirs crushed like an insignificant bug. I just wanted the NICE girl to win. That would’ve been awesome.

In the spirit of fairness, Kylie does look more exotic whereas Jamie Lee is rocking a hotter version of a [non-Playboy] Girl Next Door. Kylie had a better walk on the runway while Jamie Lee seemed not as sure of herself. But you know what? It’s hard as Hell getting your ass up on those catwalks and strutting your stuff in front of people and cameras. This I know because I did it before.

It is no joke.

Your knees are knocking together, you’re hoping you don’t fall *splat* on your face because the killer heels strapped on your feet might just be living up to the “killer” part and you’re also hoping that the lights don’t blind you because being able to see is a very good thing.

You know what else I thought was kind of messed up? Victoria’s Secret has so many models currently strutting their stuff for them and yet only a select few have been ushered into the upper echelon of Angel complete with mind boggling wings.

God, I want them. I would sooo rock Halloween and poke out a few eyes along the way.

Anyway, back to what I was saying. The following females currently grace the roster of Angels past and present :

That’s it. These are the elite. So, in essence, this Kylie chick beat out not only over 10,000 hopeful unknowns vying for the chance to be the newest Angel but also CURRENT Victoria’s Secret models. Among the “regular” VS models are none other than Jill Goodacre and James King. JILL GOODACRE! JAMES KING!!!

I dunno about you but I’m thinking this new upstart better get a kung fu grip on her brand spanking new wings, sexiest most confident walk or not.

Bonnie N. Clyde is a writer for YouBentMyWookie.com and the alias of the Supreme Commander / Ultimate Destroyer. When she’s not hating on John Mayer, watching “Ninja Assassin,” and checking out hot girls, she writes in her blog over at MissBonnified.com.

One thought on “‘Back To The Cutest Girls In The World, I Wish They All Could Be California Girls’”