While I would have loved to see the red bandanna on top of her head, for nostalgia’s sake, I get that this works best in the more realistic MCU.

In the promos for Daredevil Season 2 on Netflix, we’ve gotten some glimpses of Elodie Yung as Elektra, but not really in costume and not in action. Now, Netflix has released a new teaser for the show that is just ten solid seconds of Elektra kicking ass in costume. They’ve also released a poster that is the first full body image of the character. While I would have loved to see the red bandanna on top of her head, for nostalgia’s sake, I get that this works best in the more realistic MCU. 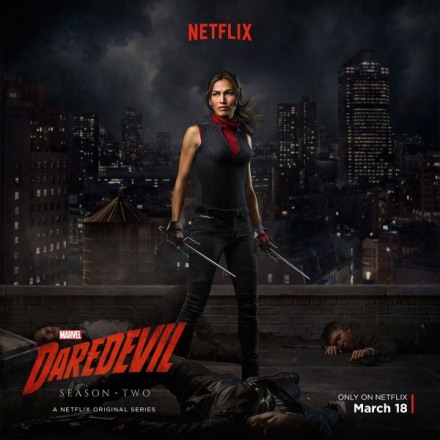 Here’s what Elodie Yung had to say about her character:
We think Elektra is a sociopath. This world is a game for her. It’s like a chess game, and what motivates her is what she wants. She’ll use anything she needs to use to get to her goal, and if she needs to kill people, she will. She has this coldness in her, and I tried to keep that. But on the other hand, we wanted to create a character with different layers. I think Elektra isn’t a bad person, but she’s not a good person. She’s a person with different traits, with layers, and she’s seeking who she is. In this season, there’s an arc to her story. Hopefully, she’ll find we’ll find out who she is, by the end of it.