Entertainment Weekly has released a nice two page spread giving us our first look and new information at the upcoming “Muppets” movies.

Entertainment Weekly has released a nice two page spread giving us our first look and new information at the upcoming “Muppets” movies.

The film will introduce a new Muppet named Walter (He can be seen in the spread holding an iPhone). While not the most original or inspiring looking Muppet, he is described as “a sweet, slightly naive twenty-something Everypuppet who, in the movie, is the best friend and roommate of Segel’s character, Gary. Both Gary and Walter are die-hard Muppet fans.”

James Bobin is set to direct and he had this to say about Walter:

Walter is the kind of guy who faints when he sees Kermit. Walter has a little bit of a self-confidence issue because he’s the only person like him that he’s seen aside from the Muppets….Segel explained. His dream is to meet the Muppets and be around people who are like him.

The story is loosely based on a original idea from Jim Henson called “The Cheapest Muppet Movie Ever Made.” It stars Gonzo who has been hired as a film director, but blows all his budget the first day. From there, he’s forced to finish the picture with only the help of his entire troupe to stage an old-fashioned extravaganza! 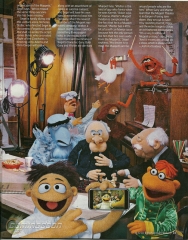