Here’s your very first look at the upcoming CGI motion capture adaptation of “The Adventures of Tintin: The Secret of the Unicorn.” 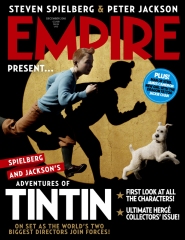 Courtesy of Empire magazine, here’s your very first look at the upcoming CGI motion capture adaptation of “The Adventures of Tintin: The Secret of the Unicorn.” Based on an original script, “TinTin” is directed by Steven Spielberg with assistance from Peter Jackson’s special effects house WETA!

All I can say from this first look is that the movie looks amazing! Here’s what Jackson had to say in regard to the casting and why they decided to go with CGI:

With live action you’re going to have actors pretending to be Captain Haddock and Tintin. You’d be casting people to look like them. It’s not really going to feel like the Tintin Hergé drew. It’s going to be somewhat different. With CGI we can bring Hergé’s world to life, keep the stylised caricatured faces, keep everything looking like Hergé’s artwork, but make it photo-real.

Meanwhile, Speilberg had this to say about the film and what we can expect:

The first part of the film, which is the most mysterious part, certainly owes much to not only film noir but the whole German Brechtian theatre — some of our night scenes and our action scenes are very contrasty. But at the same time the movie is a hell of an adventure.

“The Adventures of Tintin: The Secret of the Unicorn” stars Jamie Bell as TinTin, Andy Serkis as Captain Haddock, Simon Pegg and Nick Frost as Thompson and Thomson and Daniel Craig as Red Rackham.

“TinTin” won’t be out until next year, but it’s a film definitely on my radar and I cannot wait to see this in motion!