Entertainment Weekly has unveiled the cover to their upcoming issue which gives us our official first look of Ryan Reynolds in full CG costume as the Green Lantern!! 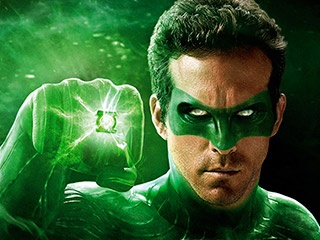 Entertainment Weekly has unveiled the cover to their upcoming issue which gives us our official (no bogus this time) first look of Ryan Reynolds in full CG costume as the Green Lantern!!

Here’s an excerpt from the magazine about Reynolds and the film:

Ryan Reynolds stars as Hal Jordan, a cocky test pilot who becomes a ring-wearing intergalactic superhero in this massive sci-fi epic from director Martin Campbell (Casino Royale). Though Reynolds has prior experience in the superhero realm from his role as Deadpool in X-Men Origins: Wolverine, playing Green Lantern involved some major challenges, like getting hurled through the air on a wire at up to 60 feet per second to create the illusion of flight. “The first time you do it, you’re seriously considering an adult diaper,” Reynolds says. Still, he couldn’t resist the chance to play the beloved DC Comics hero, whose power ring can conjure virtually anything he can dream up. “Will and imagination are his superpowers,” Reynolds says. “We need a circus of Timothy Learys to think of things Hal would invent with his ring.”

My take is that it looks similar to some of the production art that’s been floating around, but I’m not liking it as much as the fan photoshopped images of Reynolds in costume which stays true to the original design seen in the comics. It’s too soon to say whether I hate the look movie look without seeing it in action, but initial reaction is lukewarm. 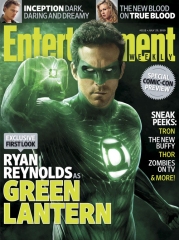