The Wausau Daily Herald recently sat down with January Jones to talk about the myriad of projects that she’s got on the horizon and some interesting tidbits popped up along the way.

One of the main focuses of the interview was her role as Emma Frost in the upcoming ‘X-Men First Class’. When she discussed first getting the role, she was more than aware of the irony. Here she was, just wrapping up another season as Betty Draper on Mad Men and she’s getting ready to be an actual super hero… and the first thing that they tell her is that it will be set in the same era as Mad Men.

While that was funny, the real news of the interview came out when she mentioned that this will not be her only turn as The White Queen. January Jones has a three picture deal with the X-Men franchise. Man… I really hope this first one doesn’t suck. 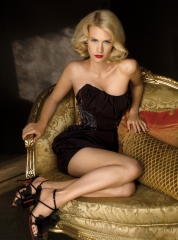