Justin Bieber & Lady Gaga To Be Aliens In MIB 3

I always sort of figured that those two were aliens anyways.

I always sort of figured that those two were aliens anyways. Now that we are moving hot and heavy into promotion for the third Men In Black film, we’ve got big news out today in the form of an announcement on some star studded cameos in the film.

Here is the giant info bomb that Barry Sonnenfeld dropped in his latest interview with Collider.

On how they choose what stars will be featured in cameos:
” Well, we’ve always had in Men in Black headquarters, alien surveillance, so one of the joys is deciding who you would put up on the board, who you would tell the world are aliens. And A) the challenge is you have to get permission from these celebrities and B) you don’t want to go with people that are either a flash in the pan, or political, or people that then in 10 years no one will know who you’re talking about. So that’s one thing, the alien surveillance board that we’ve had in all three movies. The first movie I know we had [Steven] Spielberg, Danny DeVito, George Lucas, [Sylvester] Stallone, Isaac Mizrahi, my baby daughter. I can’t remember who we had in the second one, but in this one there are a few people that you’ll see up on the surveillance board including Lady Gaga, Tim Burton, who probably knows more about aliens then I do, and let’s see who else . . . Justin Bieber . . . oh, I think in the second one we had Martha Stewart and Michael Jackson. (Barry later clarifies – “Michael Jackson was actually an agent, not an alien.”) 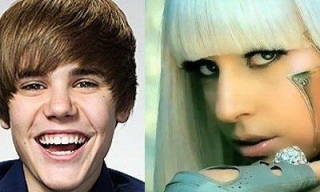