Now This… Is How You Eat A Slice Of Pizza

I’ve never seen a skinny kid that excited over a piece of pizza before.

I’m not sure what the story is behind this video, but it is freakin hilarious. It is up on several sites and it seems like he is just really excited because he made the pizza by himself from scratch. It’s not Digiorno and it isn’t a Boboli crust. For that, we give the kid credit… however, for the fact that he looks like he was about to give his pizza a lap dance, we suggest that he seek out some serious therapy. 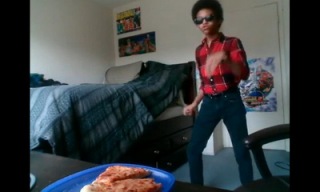