Well, at least he studied Stallone’s performance and not Rob Schnieder’s.

After the craptastic (or horribly awesome) Sylvester Stallone Judge Dredd film, fans had given up hope that there might ever be a good movie for one of the toughest characters in comic book history. Now it looks like we might have salvation in the form of Karl Urban. However, what might be a big surprise to a lot of his fans is that he fact that he actually studied Stallone’s performance before he ever donned the judge helmet himself.

Here’s what Urban told the crowd.
“I personally actually found [the previous adaption] quite handy to look at that film to see what worked and what didn’t work. It really helped me to inform me, as I was approaching the character, about choices I wanted to male and choices I didn’t want to make.” And as far as his preparation, Urban admitted that acting in a film where his face is 75% covered was a bit of a daunting task. “You know entering into any film is a challenge and this was an extraordinary challenge. First off the bat, knowing that I wasn’t going to have the benefit and use of my eyes which is such a valuable asset and tool for an actor. And by the way, that’s the way it should be done” 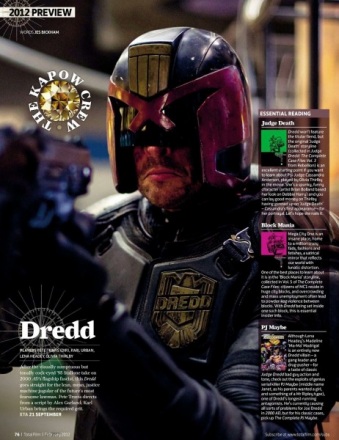