“I haven’t read it yet, but the studio’s really happy with it and there’s growing excitement around the project.”

During a recent press event for her upcoming horror film “Jennifer’s Body,” Megan Fox of “Transformers: Revenge of the Fallen” and “Jonah Hex” fame, offered an update on the comic book adaptation of “Fathom” that she’s attached to star in.

Fox has been rumored and attached to the adaptation of Michael Tuner’s “Fathom” for over a year now and this is the first bit of new we’ve heard about its development moving forward. We’ll have more as progress continues. 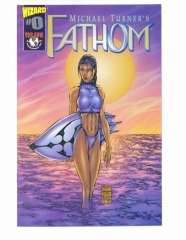