According to Comic Vine, these are images of what is suppose to be the final design. While there’s no official word on their legitimacy, we can conclude that the images are inline with the descriptions of the Playmates movie toys released at the recent UK Toy Fair trade show.

The Turtles bare similar resemblance from their original indie comic counter part, but have all been upgraded with armor and other clothing to distinguish them and to give them more personality.

Check out the gallery below and let us know what you think of Bay’s new TMNT design!

IMAGES REMOVED AT THE EVER SO POLITE REQUEST OF A LAWYER

**UPDATE – Check out this new image! 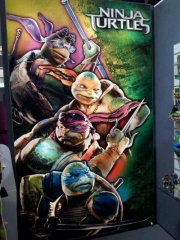