Check out the newest trailer and find out about Coldplay’s involvement in the new Hunger Games sequel.

The new international trailer is out for The Hunger Games: Catching Fire is out and it features a lot of new footage from the upcoming sequel. Additionally, the studio has also made a big announcement about the soundtrack. Coldplay will be releasing an original song for the soundtrack, and fans will be able to hear it on August 26th.

The new trailer and the press release about Coldplay can be checked out below:

Official synopsis:
THE HUNGER GAMES: CATCHING FIRE begins as Katniss Everdeen has returned home safe after winning the 74th Annual Hunger Games along with fellow tribute Peeta Mellark. Winning means that they must turn around and leave their family and close friends, embarking on a “Victor’s Tour” of the districts. Along the way Katniss senses that a rebellion is simmering, but the Capitol is still very much in control as President Snow prepares the 75th Annual Hunger Games (The Quarter Quell) – a competition that could change Panem forever. 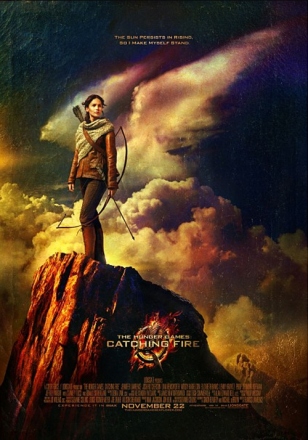 NEW YORK, NY and SANTA MONICA, CA August 9, 2013 – Multiplatinum recording artist Coldplay will release the first track from the official soundtrack album for The Hunger Games: Catching Fire, it was announced today by Lionsgate (NYSE: LGF) and Republic Records, marking the first time Coldplay has ever recorded an original song for a motion picture. The song, titled “Atlas,” is scheduled to be available via iTunes and all digital retailers on August 26, 2013. Republic Records is again teaming up with Lionsgate to release the soundtrack in advance of Lionsgate distributing the film on screens worldwide on November 22, 2013.

“I have great respect and admiration for Coldplay, and we are thrilled with how well they have connected to the themes and ideas within the film,” said filmmaker Francis Lawrence. “Their unwavering passion and excitement for the project elevated the collaboration even further, and we can’t wait to share this music with audiences around the world.”

“We are so honored that Coldplay, one of the iconic rock bands of our generation, will perform the first song out on the new soundtrack,” said Tracy McKnight, Lionsgate’s Head of Film Music. “Knowing that Chris Martin is a fan of the books makes this even more meaningful. The Coldplay single underscores the stature of recording artists we’ve assembled for this powerful soundtrack.”

Monte Lipman, Chairman & CEO of Republic Records, stated, “The creative alliance between Coldplay and The Hunger Games franchise will create a level of excitement and anticipation of epic proportions.”

Coldplay is one of the top recording artists of recent times, selling over 60 million records worldwide and winning seven Grammy Awards and five MTV Video Awards, among other honors. They are signed to Parlophone, the legendary label known for The Beatles, Radiohead, Queen, David Guetta and more.

The first installment of The Hunger Games was the 13th highest-grossing North American release of all time on its way to grossing nearly $700 million at the worldwide box office.

This is the first in a series of highly anticipated announcements of the new artists to be revealed in the coming weeks.

The first Hunger Games partnership between Republic Records and Lionsgate yielded the Grammy Award-winning, chart-dominating The Hunger Games: Songs From District 12 And Beyond executive produced by T Bone Burnett.

The album hit #1 on the Billboard Top 200 on its release with sales over 175,000, making it the first soundtrack to top the chart since November 2009. It was the best-selling soundtrack of 2012, the fastest selling soundtrack ever at iTunes, and was certified gold by the RIAA shortly after its release. The album earned a Golden Globe Award nomination and three Grammy Award nominations, and its first single, Taylor Swift’s “Safe & Sound” featuring The Civil Wars, won the 2013 Grammy Award for “Best Song Written for Visual Media”.