Bob Orci co writer of the Star Trek reboot and its upcoming sequel was interviewed by Game Pro on the upcoming video game tie-in. 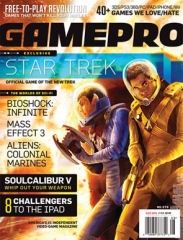 Bob Orci co writer of the Star Trek reboot and its upcoming sequel was interviewed by Game Pro on the upcoming video game tie-in. He talks about how it’s going to bridge the two films and show Spock and Kirk becoming closer friends through out the adventure. This is a cool idea but as we all know many film tie in games talk a big game and end up total ass. I’m looking forward to checking it out but as with 90% of Star Trek games ever made, it could suck big fat blobs of poop. Lets hope we can get a game we can all be happy about.

Here are a few Highlights from the interview:

“The challenge is you want the game to be as kick ass and as wonderful as any movie you would ever make. We don’t want to participate in a game that’s just a placeholder. I’ve been a Star Trek fan my whole life and I’ve played all the games, and while the consensus among gamers is that the games have never been very good, there are many games that I’ve liked. I loved Bridge Commander; I liked some of the old PC games. I’m a fan of all the games, but I’ll take the fans’ criticisms to heart.”

“We would not allow a game to go out if it was not somehow a part of the continuity. One of the things that we always loved about Star Trek before we were ever lucky enough to work on it, was that it had this very inclusive universe. If you’re a Star Trek you‘re a canon fanatic. You want to try to see how things fit into everything else. So when the idea of this game came up, we could not help but try to figure out, how does this fit into our universe? If you’re a fan of the first movie or Star Trek in general; hopefully like the Countdown comics, the game is not just a side effect but a part of the universe.”

“True fans will tell you that canon is only what’s filmed. I’m not an authority on what is canon. However, I will tell you that this may be the first game that falls within the parameters of the people who are in charge of canon for now; the “supreme court,” as we call ourselves because we are the ones in charge of Star Trek for now. We won’t be in charge forever, but for right now we’re deciding what canon is, so I can tell you this is the first time where the game itself is generated by the people who are deciding canon and we generated the game to fit within canon.”

To read the entire interview head on over to Game Pro.

CP Lorusso is TV / Film / Web writer and editor working in Los Angeles. He can be reached at CPL[at]YouBentMyWookie.com or on Twitter @CPLorusso.