Check out the new, action packed, extended trailer for Harry Potter and the Deathly Hallows Part Two and the movie poster that was just released.

Last Night, a new Harry Potter and the Deathly Hallows Part Two commercial aired during The Simpsons season finale. The commercial gave a little bit of an extended look at what we can expect in the film regarding the action. It looks like the finale will have more punch in it than all the other movies combined and I’m excited to see it all unravel on the big screen.

As a nice follow up to the commercial, the studio has also released this intense new poster for the film. 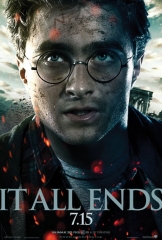