Spoiler: GUARDIANS OF THE GALAXY – One Of The Villains Has Been Revealed

This is a spoiler. Don’t click on it if you don’t want to know what’s inside.

Both Drax and Gamora, in Guardians of the Galaxy are characters with strong ties to Thanos, the big bad for Avengers 2. It only makes sense, that as the last film before Avengers 2, that Thanos would have some role to play in Guardians.

Now Latino Review is coming out with an exclusive that points us a lot closer to the mad titan than anything else has before.

According to their sources, The Controller will be one of the bad guys in the film.

From Latinoreview:
I’m told that The Controller will act as Thanos’ main henchman and ambassador. Does this also mean that we will be seeing Thanos himself in the film? With Guardians Of The Galaxy being the last standalone Marvel film that leads into The Avengers 2, I think that is a strong possibility. 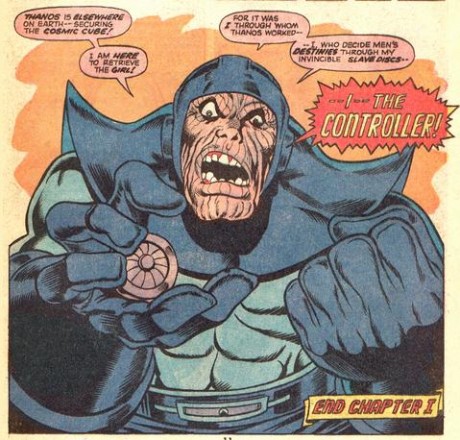 Wikipedia’s bio for The Controller:
The Controller designed his armored exoskeleton, which is micro-surgically attached to his body from head to toe and grants him mobility, as well as superhuman strength and endurance. He uses “slave discs” to control others, using the micro-circuitry in his helmet to drain cerebral energy from his victims to power his exoskeleton and magnify its strength and duplicate his victim’s abilities. He has limited psychokinetic and telepathic abilities, the ability to control the actions of any one person wearing one of his slave discs, and the ability to fire mental bolts of force from his helmet. He can psionically control “weak-willed” subjects even without his discs. He flies via boot-jets and has employed image inducers, stun mists, and other technology as needed.

The Controller originally used a mental wave absorbatron to convert cerebral energies for use by his exoskeleton, though this device was rendered obsolete after Thanos improved the Controller’s equipment. The discs now increase his physical attributes in geometric progression to numbers of victims wearing slave discs, and he was able to control the actions of all persons wearing the discs.