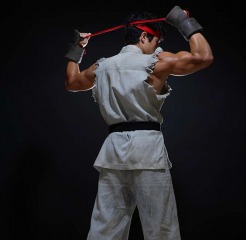 Joey Ansah (Desh) who fought it out with Matt Damon (Bourne) in “The Bourne Ultimatum” is apparently a huge fan of Capcom’s Street Fighter video game series, and as a labor of love he has created a live-action Street Fighter short film called “Street Fighter Legacy.”

Collider has the chance to speak with Ansah who spoke about how he’s “been disappointed in the Hollywood adaptations of video games” and wanted to show what was possible if you treated the source material seriously.

Collider will also be premiering the short exclusively on their site this Thursday. Until then, here are two teasers to tie you over.

The short film is a Streetlight Films production, co-directed by Joey Ansah and Owen Trevor, produced by Jacqueline Quella and stars Jon Foo as Ryu and Christian Howard as Ken.

StreetFighter Legacy has been a labour of love and passion project for its creator, Joey Ansah, who not only conceived and pitched the project, but also co-directed, co-wrote and choreographed it, alongside cameo’ing in the film. Collaborating, creative partner and long time friend Christian Howard was part of the project from day one, co-writing the script and story elements, as well as further down the line, storyboarding the film, being assistant fight choreographer and most importantly playing Ken Masters.