Thor and Conan Get Directors

Brett Ratner will be directing the reimagining of Conan. 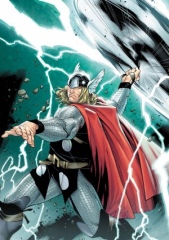 No contracts have been signed just yet, but the rumors are flying and it looks like two major films finally have their directors.

First up, AICN is reporting that Brett Ratner will be directing the reimagining. No cast has been signed yet, but Howard McCain and Dirk Blackman have already signed on as the screenwriters.

Second is Thor. This is a big deal for Marvel Comics fans because this movie fits into the larger Avengers Saga that has already included both the Iron Man and Incredible Hulk Movies. Once again, nothing has been signed, but Kenneth Branagh has pulled out of directing Hamlet for London’s Wyndham Theatre because of the film, according to whatsonstage.com. Unlike Ratner, who already has some history in the genre, Branagh’s experience is mainly in the world of Shakespeare.

Rumors have been flying about who will actually play the Asguardian God of Thunder, including Brad Pitt, but no one has been signed yet. What we do know is that Matthew Vaughn’s initial script takes place mostly in Asguard and not on Earth.