Sometimes the best way to get news about a movie is to look at the toys that will be coming out for it. Transformers is a great example. Earlier in the week, people were treated to images of The Fallen from the new movie, now we are finding out a few spoilers from the film’s producer, Lorenzo di Bonaventura, in a new interview with Toy Fair

Stop reading now unless you want some possible spoilers.

* Revenge of the Fallen takes Place about one year after the events of the first film.

* Devastator is almost four times the size of the largest robots from the first film, an estimated 100 – 120 feet tall. Someone on the TWF2005 boards created a size comparison mockup, and if that’s the scale, Devastator is going to be HUGE.

* And The Fallen’s origins have been confirmed: He is one of the original 13 Transformers. Lorenzo said to think of the 13 as “apostles”. The Falen is the one who caused the Transformers to split into two factions, Autobots and Decepticons. 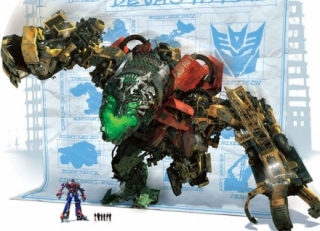