Video and Images From Upcoming Thundercats Episode: ‘The Duelist and The Drifter’

While traveling through a village built on swordsmanship, Lion-O’s cockiness loses him the Sword of Omens to the Duelist, a villainous sword-collector. 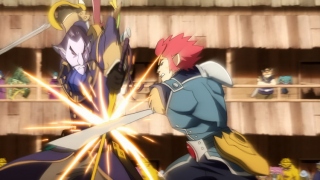 The new Thundercats series is definitely a departure from the original, but it is still one of the better animated shows that has come out recently. Last week’s episode felt like a a great cap to the opening storyline. Now we know that the quest isn’t about the book, but about the stones and reuniting all the different species of animals. If they plan it right, they’ll probably do a stone a season… just like Last Airbender did a power set every season. They’ve also been really smart about how they introduce old characters and even characters from other shows (like Mon*Star and the Tigersharks). All in all, it has been a pretty good ride.

This week’s episode looks to be mostly about character development and helping Lion-O on the path to becoming the leader he is meant to be. Check out the pics, video clips and synopsis below. After the video, chime in on what you think. Also, is it just me, or is that bunny, the creepiest version of Bing Crosby that you’ve ever seen.

This week on Thundercats: While traveling through a village built on swordsmanship, Lion-O’s cockiness loses him the Sword of Omens to the Duelist, a villainous sword-collector.With the help of the listless Drifter, Lion-O must get it back.