Watch the Trailer For Once Upon a Time in Wonderland

That… was actually a lot better than I expected.

The first trailer for Once Upon a Time in Wonderland, the spin-off of the popular ABC series is out and I have to correct myself from an earlier post. Initially, I wasn’t sure that the show warranted a spin-off. I think I may have been wrong. I just watched the trailer myself and it looks like a completely new story concept compared to the original show and it looks like it has the makings for a very exciting new series.

I’m a little confused on casting. For a while now, Paul Reubens has been listed as the voice of the White Rabbit, but the synopsis lists John Lithgow. Honestly, I’m happy with either. 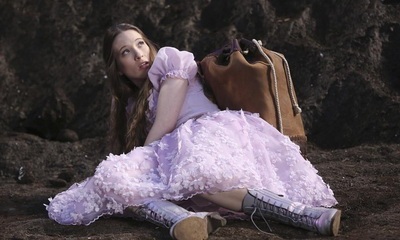 Official Synopsis:
“ONCE UPON A TIME IN WONDERLAND”

In Victorian England, the young and beautiful Alice (Sophie Lowe) tells a tale of a strange new land that exists on the other side of a rabbit hole. An invisible cat, a hookah smoking caterpillar and playing-cards that talk are just some of the fantastic things she’s seen during this impossible adventure. Surely this troubled girl must be insane, and her doctors aim to cure her with a treatment that will make her forget everything. Alice seems ready to put it all behind her, especially the painful memory of the genie she fell in love with and lost forever — the handsome and mysterious Cyrus (Peter Gadiot). But deep down Alice knows this world is real, and just in the nick of time the sardonic Knave of Hearts (Michael Socha) and the irrepressible White Rabbit (John Lithgow) arrive to save her from a doomed fate. Together the trio will take a tumble down the rabbit hole to this Wonderland where nothing is impossible.