Wondercon 09 – Terminator: The Sarah Connor Chronicles 3rd Season Still Up In the Air

Still ratings challenged and a season 3 looks grim – this makes Summer Glau a sad Wookie, really it does. 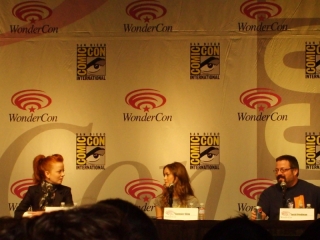 Before the panel and Q&A began, a lengthy clip was shown from the upcoming remaining six episodes of season two. The footage was action packed and laced with a humorous yet eerie rendition of an old Scottish folk song “Donald, Where’s Your Trousers?” sung by John Henry and Catherine Weaver’s human daughter. From the early fan reactions, this will probably go down in Sarah Connor Chronicles infamy once it debuts.

“Let the wind blow high and the wind blow low
Through the streets in my kilt I go
All the lassies cry, “Hello!
Donald, where’s your trousers?”

*Begin Spoiler Warning!!!!!!!!!*
The footage began with Cathrine Weaver’s human daughter meets John Henry and they decide to play a game of hide-n-seek. It is soon revealed that the little girl goes missing. In between there are sequences where Cameron pays homage to the original Terminator and she’s seen with a shotgun shooting people in a close quarters and getting shot up herself. There is a scene where it appears as if Cameron has discovered that Riley, John’s “Girlfriend,” is really from the future and John is afraid that Cameron may kill her. Sarah meets Jesse face to face for the first time. John is seen talking to Derek and asking if he Cameron wanted to kill him, when he’d know. Derek replies that if she wanted him dead, he’d already be. We also see John begin to assert himself more especially toward Derek. The biggest shocker from the footage is probably the final scene at the end where for a few seconds we see John laying on top of Cameron as if he had just kissed her or had just finished doing something else…
*End Spoilers!!!!!!!!*

The panel discussion with Friedman, Manson and Glau was both entertaining and informative. Friedman joked that “Like most women, Shirley scares the s**t out of me,” while Manson admitted that she never though her role on the show would be this large and that the character she plays is “scary bad” (In reference to the character’s warehouse mass slaughter).

Some other things discussed included how Cameron would make more appearance in the final six episodes. She has been limited as of late because they wanted to emphasize Sarah more, and because both Sarah and Cameron are “alpha” characters. “One of the challenges with the Cameron character is that she’s as much, if not more of an alpha as the Sarah character… if you really want to investigate Sarah, it’s sometimes hard to have Cameron around.” 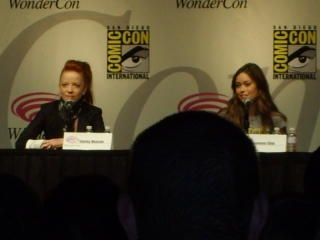 It was also hinted that both Manson and Glau’s terminator would appear together in a future episode. When joked about who’d win in a fight it was unanimous that Manson’s terminator would kick the crap out of Cameron. To which Manson then joked, “Age before beauty.”

Other stuff mentioned was that the upcoming Terminator: Salvation would not tie in with the show. There are obviously references, but the show will be close and tight so The Sarah Connor Chronicles won’t turn into a “Where’s Waldo? of Terminator trivia.” For fans who’ve complained about the show’s pacing, Friedman admitted that it has to be done otherwise they’d run out of material in a season.

Lastly, as most fans of the show know, Terminator: The Sarah Connor Chronicles is “ratings challenged.” When probed about a season 3, the overall response from Friedman and Glau was grim – no one knows anything but are hoping for the best (Glau threw on the sad puppy dog face). “I don’t know anything” Friedman repeatedly said. Good news however, Season 2 is not meant to be the end, and there’s still a lot more to come.

So fans of the show who are worried that there might not be a season 3 should begin organizing campaigns and sending letters to Fox demanding a season 3. Meanwhile, “Ourselves Alone”, the first of the final six episodes, airs Friday, March 6th.