Lisa Black: Finding Art In The Death of The Cute and Furry 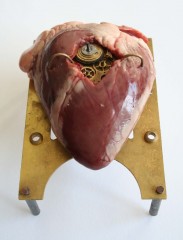 YBMW: What is your fantasy animal that you would love to work on but have not had the chance to yet?

LB: As mentioned, my first mental image was of a mechanical horse. Although I don’t intentionally look for certain animals, I enjoy working on animals that have some nostalgic significance though. This was brought to my attention by a stranger in the internet world after I made the Fixed – Crocodile – because of the Peter Pan reference. But then again most animals have been used in fables in one way or another.

YBMW: Is there an animal you wouldn’t work on?

The animals I find are mostly rotting away in someones dusty garage. I would rather make them into something most people will at least pay attention to, and some people will love.

YBMW: Has there been an animal that you’ve worked on that was more emotionally challenging than the others?

LB: Not for me…but the monkey skulls seem to be affecting quite a few people out there !

I’ve found that the closer to the human form or the cuter animals are, the harder it is for some people.

For example I have had complaints about the monkeys, fawn, and duckling….but never about the crocodile or ferret.

YBMW: What kind of person wants this type of art?

LB: I haven’t noticed any patterns. I’ve had buyers from newspaper journalists to people in the S&M industry. I like it that way though, I prefer my work to appeal to a wide variety of people.

YBMW: Is there a special meaning or message behind the sculptures?

LB: In the past I have mentioned transhumanism* and the fact that I’m all for the technological development of human enhancement. Same goes for my animals.

***Just in case you aren’t familiar with the term, Transhumanism is an international intellectual and cultural movement supporting the use of science and technology to improve human mental and physical characteristics and capacities. The movement regards aspects of the human condition, such as disability, suffering, disease, aging, and involuntary death as unnecessary and undesirable. Trans humanists look to bio-technologies and other emerging technologies for these purposes. Dangers, as well as benefits, are also of concern to the transhumanist movement.

YBMW: Have you considered using other mediums besides animals, like old toys for example?

Interested in Lisa Black’s Art? You can find her at: www.lisablackcreations.com
Or, you can purchase her Butterfly art at: http://www.gildedbutterflies.com/