Lisa Black: Finding Art In The Death of The Cute and Furry

Art is subjective. From the Popogandist art of Ron English, to the comic book art of Jim Lee, and even the controversial work of Andres Serrano, art takes on a different meaning for anyone who views it. We here at YBMW try to take time out whenever we can to show off a new artist, or great art from a gallery show, but we’ve never really seen anything like the art of Lisa Black, so we had to track her down and talk to her about the idea’s behind her art, how she does it and… just where the heck did she get the idea to turn other people’s old taxidermy into new art. 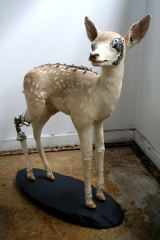 YBMW: Lisa, Thanks for taking time to talk to us today. Where are you from?

Lisa Black: Now I live in Auckland New Zealand. Although I am originally from Australia.

YBMW: When you were a kid, what kinds of toys did you play with?

LB: I used to play with toy cars/trucks and action figurines. I liked toys that did something…transformed, rolled, shot etc… My parents bought me a Barbie once and I remember thinking “what do I do with it?” So I stuck it in my trucks and sent it flying off all sorts of high platforms. Also, it’s clothes changed color with water so at least that was something. As for cartoons, I was really into Thundercats, Astro Boy, Voltron, Transformers and He-man.

Most recently I remembered Robostory. I had this voice saying “You are the lowest of the low” in my head for years and had no idea where it came from – hooray for the Internet. I watched Carebears too…but don’t tell anyone.

YBMW: You have a very interesting chosen medium for art. What made you decide to start using dead animals and clockworks?

LB: I didn’t intentionally set out to use either. I got the idea of a robotic horse one day when I was extremely fatigued/jet lagged (all my best ideas occur when I’m in this state for some reason). Obviously using living animals wasn’t an option, so I moved on to dead ones. And as for the clock parts – they fit in with the aesthetic I was trying to achieve – Vintage, intricate, and functional.

YBMW: How have your friends and family reacted to your work?

LB: Kindly. The people closest to me know I love animals (I wanted to be a vet growing up). So, they are really supportive. To be honest, when I started, I had no intention of showing them to anyone, I really didn’t think there would be so much interest.

YBMW: Would you ever consider using a pet of your own for a piece after they’ve passed away?

LB: I haven’t had a pet since I was a teenager – I’m a city dweller.

I’m not sure how I’d feel about working on an animal which I knew though, because I remember my pets being my friends. It’s like a surgeon operated on a family member – an emotional disconnect would be difficult.

YBMW: Would you ever consider (if you wouldn’t get in legal trouble) using a human body for one of your pieces?

LB: I wouldn’t be opposed to it from a moral standpoint – but it’s already been done a hundred times, in movies at least (Borg, Terminator etc).